The first school was built of logs in 1939. Then again the men hauled the logs. The first teachers to teach in the new log school were Mr. and Mrs. Durand, in about 1939; then Stella Chodin; next Mabel Kinch (Mrs. Mabel Dumont) and later Mr. and Mrs. Mcllwraith. In those days not too many students got past the eighth grade, so education was limited. Happy to say we now have people that are counsellors, kindergarten teachers, etc. 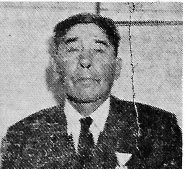 F.J. Dion, past president of the Alberta Metis Association, after whom the school was named.

The Ben Merenti medal was presented '"for his devotion to the cause of his people."