In September, 1936, I was engaged by the school board of the Primula School District No. 2954, to assume the teaching responsibility for the next ten months. The school enrolment was 38 pupils, with grades ranging from 1-10 inclusive. I was at first a bit apprehensive, not only because six years ago I was a pupil at this school, but also because there were so many grades and a large number of pupils. But I survived. 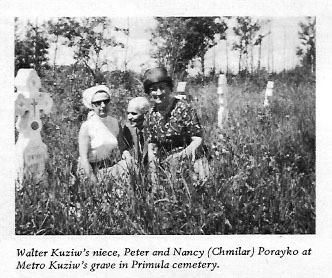 During the three years at Primula I had the pleasure of teaching some of the finest young men and women who pursued their education to become very active citizens. From that group there is an electrical engineer, an accountant, a principal of a School of Agriculture, a president of the Alberta Labour Council, a dentist, an M.L.A., a nurse and a couple of teachers. This speaks volumes about the community.

Before the community hall was built the school was the community centre. The structure itself was made of fir, and the plan was no different from the plans used by the Department of Education in constructing frame school buildings throughout the province. Its dimensions were about 24 x 32', with a highpitched roof, the front of which had a belfry housing a bell which when sounded could be heard two miles away. The inside of the school was filled with desks, except the south-west corner which accommodated a barrel heater and a huge wood-box. During the cold winter days the heater would be stoked continuously, keeping it red-hot to maintain above freezing temperature in the far corner of the school. During winter the pupils huddled around the heater, while in the warmer months they played either softball or soccer, depending upon which equipment was available.

With the introduction of bus service to centralized schools Primula, like hundreds of other schools, disappeared. The little one-roomed school had served its purpose.