Among the first settlers of the Norway Valley district were Austin Benson and Sam Anderson who came in 1909. Alex Lunden, 1910; Knut Vinge, Vraal Kleven and John Thorsen all arrived in 1911; Edward (Pop) Sanders, 1912; Swan Johnson, 1913; Andrew Johnson and Everett Helgersen 1914.

The first school board consisted of Ole Tweed, Gunder Dalen and John Thorsen. Dick Midgley took over as secretary beginning 1927. Later Eddie Lider and Oscar Vinge also served on the board. The C.P.R. was not paying taxes. They started paying taxes in 1928 - taxes amounted to over $700.00. The first teachers in the new school were Rachel Haugen of Edgerton, and Alex Peterson of Frog Lake. Other teachers were Harold Ronning, Mrs. Beth Colpitts, Miss Jardine, Miss Anna Wilson - a student doctor from the University of Alberta and Mr. Philpotts, also a student doctor. Classes were held only in the summer months from May 15 to September 15. Gus Brocke taught from 1929 until the school was moved to Heinsburg in 1948.

The Post Office was opened February 1st, 1923 with Oscar Vinge as Postmaster along with running a store until 1928. During the twenty-six years the post office was in existence the mail was hauled out from Heinsburg by team by Mr. and Mrs. Walter Sawak, Harry Bowtell and Bruce Bowtell. There was many a cold and wet trip that they made. On S.E. 32-55-3-W4th a store was built in 1918. It was run by Sam Tarrabain and Abdou Saffa. They were still there in the early 1920's. 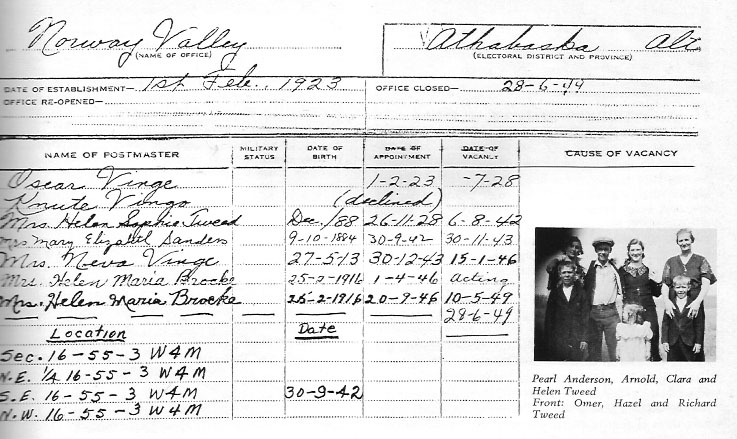