The beginning of local government must have been when the white settlers moved into the area after the rebellion. It is impossible to trace its path and there is the possibility that it was completely under the thumb of the two major governments - Federal and Provincial.

It is a well-known fact that the Indian Reserves, while having a form of local government, are under the Government of Canada. The same applies to the Metis Colony (Sputinow), except that the Alberta Provincial Government is at the head.

Little has been passed down, except through the police reports, until the necessity for schools arose with the subsequent division into school districts. When a school district was formed it was allowed its own autonomy and was allotted section 29, to be known as the "school section"; to be used to supply emergency funds for the district. This section was not open for homesteading but could be rented out, usually for agriculture. Previously the C.P.R. had been granted each odd-numbered section as payment for building the railroad through the west; that is, with the exception of section 29. Revenue from the C.P.R. land apparently went into the government coffers for many years until a legislation amendment directed C.P.R. taxes into the school districts. 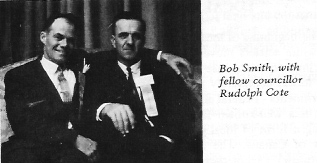 Each school district elected a school board consisting of a secretary-treasurer and from three to five trustees from which a chairman was chosen. The local board was responsible for advertising for, hiring, paying and discharging teachers. Theirs was the task of arranging for wood and usually a local ratepayer was hired to cut cord wood, haul, split and pile it in the school yard. Each local board set the mill rate for its district, collected the taxes and received a government grant. They were expected to handle any school problem that arose but as a last resort could appeal to the Department of Education. It was usually a board member who drove a team and buggy to Kitscoty, or other designated nearest railway station, to meet and deliver the new school teacher to a prearranged boarding place.

Either an older pupil or the teacher was paid a small sum to open the school and build the fire in the heater each morning. Teacher or pupils were expected to sweep the floor before leaving for home at the end of the school day. Parents supplied their own children with text books, slates, slate pencils (later pencils and scribblers), pen and ink, crayons, paints and drawing pads; likewise transportation to and from school. Most school boards kept the district reasonably free of debt.

As early as 1914 Mr. Ramsbottom of Mooswa headed a movement to form a municipality. A vote was taken, and being favorable, the Lincoln Municipality No. 542 was formed and the first Council was elected December 22, 1914. Boundaries - west between ranges 5 and 6; east between ranges 3 and 4; south to the river: school districts to be governed independent of the municipality re school affairs. There was a short period of time when a porthin of township 55 was included in the Vermilion municipality. Mr. Ramsbottom was appointed first secretary-treasurer; then Mr. Tommy Johnson of Mooswa, who held the position until Lincoln joined the large Municipal District of St. Paul. The municipality was divided into divisions, each with its own elected councillor. Head office was situated at Mooswa. Some councillors in this district were Messrs. Fred Gregor, George Hall, David Bristow, Marshall Upchurch, Nelson Litchfield and Knut Rinde.

At times the councillor received more than his fair share of criticism, such as a remark made by Mrs. Nels Litchfield while Nels was in office. A gentleman had enquired in Heinsburg how to get to the councillor's place. He was told to follow the best road in the district. "And," said Annie Litchfield, "would you believe he ended up right in our yard." Some controversy arose when some ratepayers got the idea that ratepayers in the L.I.D. to the east got a better deal from the Provincial Government. Taxes in the L.I.D. were usually somewhat lower than in the Municipality. However, the municipal taxes were quite reasonable and could be partially paid for by road work. Frank Bristow was a M.D. road foreman.

The area east of range 4 remained in the Local Improvement District (L.I.D.) Taxes were paid directly to the Provincial Government. Road work was given mainly to ratepayers whose taxes were in arrears. Abe Granger was an L.I.D. road foreman. When taxes became so far in arrears that payment became impossible the government allowed the taxes to be consolidated. This meant that half the road work wages went toward paying off the arrears and the rest applied on the current tax. This was during the 1930's when the Government placed a moratorium on debts which prevented mortgage companies and collection agencies from foreclosing.

We regret that much local government data was lost to us in 1946, when a fire destroyed the old municipal office in St. Paul. Acomb district is still in the Local Improvement District. Primula, south of the river, is now in the County of St. Paul.

Further details of this subject are written in the histories of the districts and personal involvement told in the family stories.

Thanks to our present councillor, Bob Smith, for the following articles bringing our Local Government up to date.

A report and history of the representatives of our area, which served us on the Municipal and County Council of St. Paul.

I believe that every councillor before me and including myself, made decisions that seemed right at the time, with what we had to work with. Agreed, mistakes were made, but very few if any were intentional. Thanks to all the councillors before me, for their efforts and accomplishments.

History and statistics of St. Paul School Division representatives from the Frog Lake and District area.

Our first representative for the new St. Paul School Division was Mr. Knut Rinde, who served us from 1939 to 1944. Then Mr. Gladstone Horton served from 1945 to 1948; Mr. William Smith, Sr. from 1948 to 1955; Paul Buck from 1955 to 1961; Mr. Norman Howarth from 1961 to 1962. Norman Howarth was the last school trustee who represented us, as the County was formed in 1962 and assumed responsibility for school operations. Louis Kapjack was our first representative on the County Council serving us in Educational as well as Municipal affairs, to 1964. All of these gentlemen served us well, giving us their best, and we are grateful for their efforts on our behalf.