Joe Price had come to Canada from Wales with the Imperial Army. He later joined the North West Mounted Police. He served thrity-two years in the two forces. His wife, Nancy Bailey, was born of an English father and a Cree mother. She met Joe at Fort Garry, where her father worked for the Hudson Bay Company.

Because of the family's involvement in the Rebellion, the following material is being included. Bill's story will be told later in the Fishing Lake section. The accounts have been taken from clippings from the North Battleford News- Optimist in 1961.

Charles Herbert Price died in October, 1961 at the age of 84. That same year, and month, Mr. and Mrs. Harry Price observed their sixty-fifth anniversary. They were marÂ­ried in St. Vital's Catholic Church (Manitoba) in 1896 by Father Bigonesse, but almost from their births at frontier outposts to N.W.M.P. families, they have shared a common course. They both have known long, weary pioneer trails, the rigors and loneliness of homestead life, the loss of homes and belongings to marauding Indians, and the proÂ­tection of the stockade of the Battleford Police Post during the Riel Uprising of 1885. 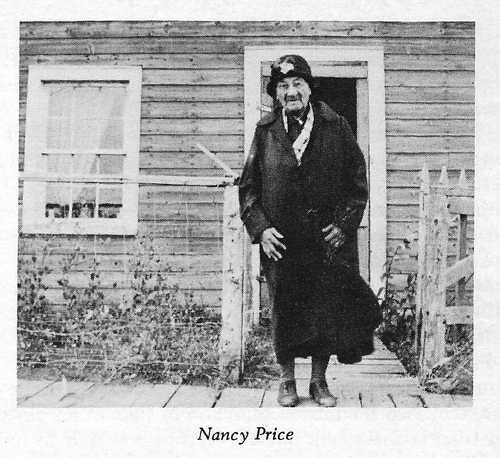 Harry was born at Fort Garry, Manitoba. When the faÂ­ther, Sergeant Joseph Price of the N.W.M.P., was transferÂ­red to Battleford in 1884, he followed with the family. At twelve years of age, for him, the three-month trip by team from Winnipeg was exciting, and the prospect of a life in the west was almost too much to bear.

His father left the force shortly after to take up farming in the Lindquist district, west of Battleford, on the Battle River. It was here the family was warned of the approach of marauding Indians and of the frenzy being stirred up by Riel. Even as the warning was being given, the sky was red with the burning and pillaging of Telegraph Flats. The famiÂ­ly piled into a wagon at sunrise on that April day in 1885. On their mad dash to the protection of the fort, they were intercepted by the Stoneys near the Battle River, and only escaped through the pleas of their Metis driver, Tommy Hudson.

At the end of the siege Joseph Price took his family to the Indian Reserves at Red Pheasant and Duck Lake, where he served as farm instructor.

Harry's wife was born near Edmonton. On the death of her father, Constable Brazeau, she came to Battleford in 1882. Her mother remarried, and a new family life began on a homestead near the Pronqua Hills. It was a happy time until the never-to-be-forgotten night when the chilling warning came, "The Indians are on the warpath!"

After her marriage to Harry eleven years later, they went farming in the Eagle Hills, but Mrs. Price had not forgotten her earlier fears. The country was lovely, but there were snakes everywhere, and with the incessant yapping of countless coyotes, and the isolation and loneliness, she was always afraid. When her husband was away, she would nail up the doors and windows, and live in a state of veritaÂ­ble siege until he returned.

After eleven years it "just wasn't worth it." With only primitive tools at hand, it took too long to get things done. Eggs were ten cents a dozen, butter was fifteen cents a pound, and grain sold for twenty-five cents a bag. The family returned to Battleford, where Harry found employÂ­ment at the Saskatchewan Hospital, working as supervisor of the shoe department for twenty-one years, counting his service with the Fifty-third Infantry Battalion in the First Great War. He lost the sight of one eye, and his hearing problem is a result of war wounds.

In his prime, he played football, curled, and took long walks, summer and winter. His greatest pride was his well-kept property, and gardening. As two of the five local resiÂ­dents, who were in the stockade in 1885, Mr. and Mrs. Price have been presented several times as honored guests to distinguished visitors at the Fort Battleford National Historic Park.