Information up to the year 1965 prepared by Knut Rinde

In the fall of 1914 Sivert Oien was up in the Lea Park district looking for land, and at the same time held parochial school in Norwegian and taught religion in the neighborhood.

He arranged for Rev. Knutsen from Edmonton to come out and hold service. How he got out I don't recall, but he came and held the first meeting in the North Park district. This was held in Sondre Barstad's house.

Luck would have it that the ferry got stuck in an ice jam in the middle of the river, so Sivert had to rustle a team and wagon on the south side of the river to bring Reverend Knutsen back to Kitscoty. Six miles west to Pete Holman's Sivert went to get a team and democrat. This was an unexpected delay, and the train to Kitscoty was not likely behind time; however, they made it. 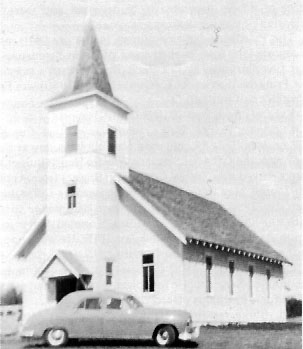 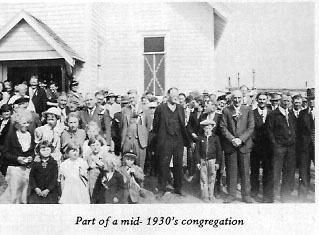 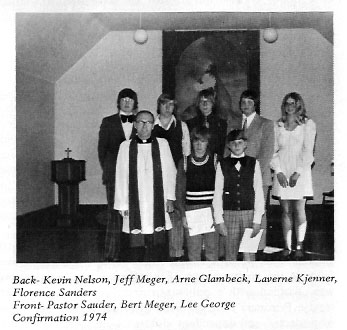 The congregation's first annual meeting was held in J.P. Berg's house after service on February 27, 1918, with Rev. Satre as chairman. Minutes of the first meeting were read and adopted. The following families were added to the congregation: Benny Benson, Edwin Grasdal, Julius P. Berg, Martin Klabo, and Vraal Kleven. At that meeting three Deacons were elected; A. Valan for a three-year term, V. Kleven for a two-year term, and J.P. Berg for a one-year term. Mr. Eiven Peterson continued as secretary, and Mr. A. Valan was elected treasurer.

In 1975 the church's 60th Anniversary was celebrated July 27th. A welcome to special guests was extended to the following pastors and their families: P. Stolee of Edmonton, Gene Grant of Saskatoon, Leon Gilbertson of Vancouver, William Braaten of Jansen, Sask., and Norman Foster of Chaplin, Sask.

Some interesting facts about Bethel Congregation: Bethel has been and remains today a community church - a community church in the sense that it's congregation is serving the needs of many people within our area from many denominational backgrounds, as well as Lutheran. In the life of the congregation we hope that all is done to the glory of Jesus Christ. According to the church records there were two hundred and forty-nine people, both infants and adults, baptized into the life of Christ in the years 1915-75. There are one hundred and seven Confirmands listed for those sixty years. Thirty-nine marriages are recorded, with twenty-three of them having taken place in our present church building, which is forty-two years old. Sixty funerals have been performed for members and friends in the community. 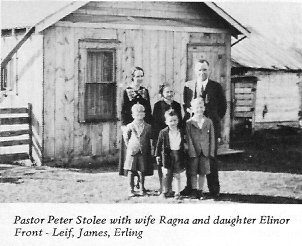 Many memories of the joys and sorrows of life are etched in the hearts and minds of those who have worshipped here.