Fresh out of Normal School I first came to Lea Park in 1923 to take charge of North Park School for two months. Again in 1926 I taught in North Park for six months, January till June. My brother, Gunder took over North Park the next year and remained there until 1945. I went to Elgin School, south-east of Lea Park for two years. In September 1929 I came to Norway Valley School where I remained until it was centralized in 1948. This was during the "hungry thirties" and the war years. In the late twenties my father and mother moved from Edmonton to take up residence in a house on Gunder Brocke's place in Lea Park. My brother, Torval, and his family moved into Norway Valley at this time and farmed what is now the Barstad place. There was quite an influx of people from the dried out areas as well as some families from Norway., The population of Norway Valley was at its peak at that time.

Although times were hard and money scarce no one really suffered. The school was the centre of social activities, dances, whist drives, amateur dramatics, and sports activities. The high light of the year was, of course, the Annual Christmas Concert. It was during this time that some of the Norwegian boys: Ted Thorson, Iver Busterud, Jens Grenrud, John Thorson, Halvor and Bjarne Johre and others built a ski-jump on the river hill at Thorsons and for a few years the annual ski tournament was quite an event. This was also the time when Amateur Concerts were the rage. It was at one of these in St. Paul that I met my wife. Out of more than seventy entries, Helen Nelson playing a piano accordian was a winner and Alex Peterson, Gunder and I were also winners with a selection for two violins and piano. All the winners (eight altogether) gave a special Radio Broadcast over CJCA, Edmonton, later. Helen and I were married in October 1937.

The war brought an end to the depression but rationing of sugar, gas and tires gave us other problems. During the war teachers were frozen to their jobs, and starting in 1943 daylight saving time was instituted in summer. The school year started in October instead of September so that older boys would be available to get harvesting completed. That summer Gunder and I, with our families, drove to Vancouver. While there we helped the war effort by picking hops and Gunder and I also took the boat north to Prince Rupert. Helen had a job for a couple of months cooking in the Port Simpson Hospital and I took the train back to Norway Valley where I spent the remaining time until school started by stooking for the neighbors. At this time we had two additions to the family, a boy, Larry and a girl, Winona. In 1945 the Gunder Brockes and the P. Eidsvigs sold out and moved to Vancouver. 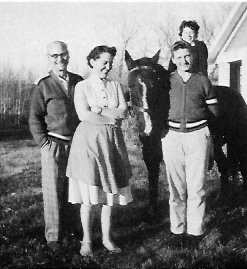 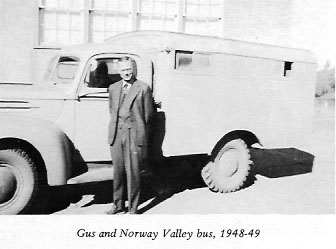 In 1948 the school was centralized in Heinsburg and the building was moved to town and became the high school room. During that year I lived in the Valley and drove a small school bus to get myself and the Norway Valley children to School. The next year we moved to Heinsburg and lived in a moved-in school (the old Frog Lake School) converted into living quarters. With the spring thaw we were almost flooded out. During my first year in Heinsburg Mr. Powell and Ruth Brown, Mrs. Smith and I were the Staff. Mr. Powell and Ruth Brown left the next year. Mr. Lukenchuk took over the High School class, while Miss Betty Lecomte had grades 4, 5, and 6, Mrs. Smith had grades 1, 2, and 3, and I had grades 7, 8, and 9. After two years in Heinsburg we moved to Cold Lake where I taught until my retirement in 1970. Since then we have lived in Maple Ridge, British Columbia. Both Larry and Nonnie completed school at Cold Lake. Larry went on to University earning his B. Sc. and Masters Degree in Agriculture. He now lives in Sherwood Park with his family, a wife and two little girls. Nonie was married in 1965 to John Strohm 'of Coquitlam, British Columbia and has lived at the coast since. She and John have two boys and two girls and now live in Maple Ridge, British Columbia.