In the spring of 1961 we, who had waited since near the turn of the century for this event, gave enthusiastic approval to the announcement that a bridge was definitely scheduled to be constructed across the North Saskatchewan River at Heinsburg. Construction was to commence in 1961, with completion estimated in one year. The announcement was made by Honorable Gordon Taylor, Alberta Minister of Highways. This bridge, the third to be built from a point north of Vermilion to a point north of Marwayne, would leave the Meridian, at a point north of Lloydminster, as the only crossing where a ferry would still operate for many miles to the west. 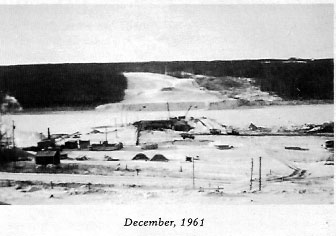 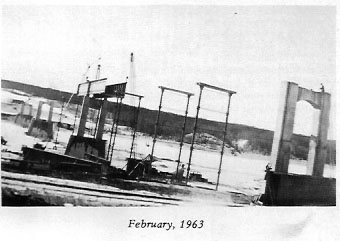 On October 9, 1963 the Hon. Mr. Taylor cut the ribbon, and the bridge was officially opened. He was assisted by Hon. Anders Aalborg, M.L.A. for the Alexandra constituency and Minister of Education, who had directed his influence in favor of the bridge. Other government officials present were: Hon. Ray Reierson, M.L.A. for St. Paul and Minister of Labour and Telephones; Ashley Cooper, M.L.A. for Vermilion; and Romeo Lamothe, M.L.A. for Bonnyville. Master of Ceremonies, John G. Anderson, Councillor for the Municipal District of Vermilion River, introduced W.J. Anderson, Reeve of St. Paul County. He in turn welcomed dignitaries: Louis Kapjack, Councillor for Heins- burg; Jack Kelly, Reeve of Vermilion River M.D.; and the government officials. 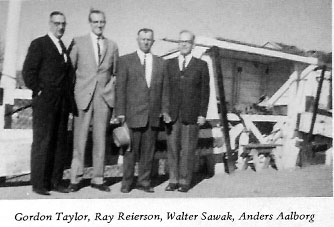 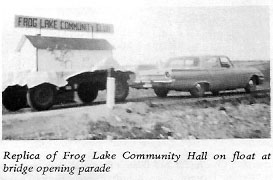 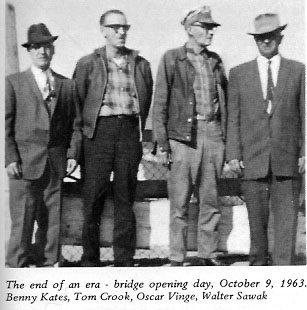 The Heinsburg Board of Trade arranged the program which was opened with an impressive aerial display from the Royal Canadian Air Force Base at Cold Lake, highlighting the Red Knight in his bright red Sabre jet. This, with the ferry and row boat on display, and the motor cars, gave one the impression that land, water and air were represented. The parade featured thirty-two floats. It was paced by R.C.M.P. from the St. Paul detachment, including Sgt. J.R. Kenny, Const. Wm. Thorkelson and Const. Zelenski of Bonnyville. Special recognition was given to Walter Sawak, whose job as ferryman ended after sixteen years. Paul Buck, former Heinsburg Councilor, presented him with a plaque and trophy. Mr. Lee Green, formerly of the Greenlawn district, spoke for the oldtimers, and Miss Karen Buck, a Heinsburg student, gave a message for the youth. A barbecue and dance ended the day.

In his opening address Mr. Taylor noted that "the bridge was a tribute to the oldtimers, for sacrifices they willingly contributed to the future, the benefits of which we are reaping in the construction of the bridge." He also commended the Heinsburg Board of Trade for their effort and planning of the day's activities. His concluding remarks expressed his personal hopes that "the bridge would be a highway of happiness, welding the north and south together for economical integration and accident-free travelling."

This bridge, open-deck style, is capable of carrying two 72,000-pound vehicles going each way. It is 1,275 feet long, has 28-foot approaches and a bridge surface of the same dimensions, plus a 2 1/2 - foot curb sidewalk. It spans the highest point of water level at a height of 90 feet. Much of the foundation was a wintertime undertaking. One side of the river was dredged and dammed, allowing caissons to be worked deep into the river bed for a solid foundation for the piers. The bridge is laid on five welded steel girders held on piers, which are supported by steel pilings driven 40 feet into the bed. The outside girders are 237 feet, the two flankers on each side are 260 feet, and the center one is 280 feet. Over 1,100 tons of structural steel was used in the frame plus 40 tons of reinforcing steel.

At the time of construction this was one of the most modern bridges across the North Saskatchewan. The total cost was $1,205,000. Road approaches 1.4 miles south and 2 miles north cost an additional $126,000. Location of the bridge is approximately 1/2 mile west of the old ferry crossing.