John Travers Hill was born in Lame, Ireland and came to Canada with his parents in 1885, settling at Napanee, Ontario. He completed his formal education at Queen's University where he studied medicine. While at Queen's he was on the rugby team that won the Canadian Championship in 1899.

Dr. J.T. Hill came to Lloydminster in 1904, at which time he was the only doctor between Battleford and Vegreville. He was also on call for service to the Onion Lake and Frog Lake Indian Reserves. In 1908 he went to Scotland where he obtained, with honors, his University of Edinburgh degree in medicine. Returning to Lloydminster in the spring of 1909 he was a member of the first Town Council, and served as Mayor in 1909, 1913, 1921 and 1922. 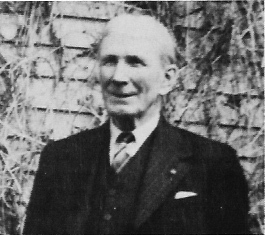 Dr. Hill went overseas to Salisbury Plain, England in 1914 as Captain with the R.C.A.M.C. He was sent to France on March 22, 1915 to Wimereux, and later to Etapes. Returning to Ramsgate, England in October 1915 he organized three hospitals for the Canadian wounded: Granville Special, Townley Castle and Chatham House. Dr. Hill was promoted to Lt. Colonel in 1919. In 1917 he was married to Isobel Andison Scott. They returned to Lloydminster in 1919.

Dr. Hill organized the first hospital in Lloydminster (10 bed) and subsequently donated it to the town. Later on he also donated forty acres to the Exhibition Grounds. In 1923 he joined the Department of Indian Affairs, and served as doctor for 7 Reserves, with headquarters at Onion Lake. In 1933 he was appointed Indian Agent, in addition to his medical service; a monumental task in which he served until 1940 when he retired and moved back to Lloydminster.

In 1941 a delegation from Hughenden approached Dr. Hill requesting him to serve as medical doctor for five municipalities in that area. He accepted the post, in which he served until 1952, when ill health forced his retirement to his farm home one mile west of Lloydminster.

Throughout his life Dr. Hill was a nature-lover and conservationist. Agrarian at heart, he took a keen interest in the illustration farm, south-east of Lloydminster, which was operated by his brother Hugh from the early 1920's to the mid-30's. Dr. Hill continued to operate the farm after his brother died. He won the World Championship for field peas at the Chicago Exhibition in 1922, '24, '25 and '26. The peas were grown on his farm north of Lloydminster, and were harvested from fields on the east and west sides of the old Fort Pitt Trail. Dr. Hill supervised the operations of four farms, from 1941 until his death in 1957. He was predeceased by one son, John, killed in action while serving with the R.C.A.F. Surviving (at the time of this writing, April 1975) are his wife Isobel; two sons, Hugh and James; and daughter Mary (Mrs. B. Packman).

Dr. J.T. Hill will long be remembered for his contributions to society as a doctor, agriculturalist and humanitarian.

Footnote: Isobel Scott met J.T. Hill in 1908, when he was in Edinburgh working toward his degree. She was sixteen and he was thirty-five. As the story told, he returned to Canada in 1909. The following year Isobel and her mother moved to London, England, because of her musical career. John had their London address. On his first leave from his contingent, stationed at Salisbury Plain, he looked up the Scotts. That was the end of Isobel's musical aspirations! Mrs. Hill describes her husband as a very reserved man who hated publicity. Corporal Pearson, of the R.C.M.P. often drove with Dr. Hill on trips north. After Dr. Hill's death he wrote, "Dr. Hill was a second Abraham Lincoln."