There was never a post office in the Martin District and Frog Lake was the address of the early settlers: later we were taken into the Heinsburg postal district.

The name Martin originated in 1914 when Joseph Martin donated land on which to build a school. This was a portion of his homestead, location, N.E. 26-55-4-W4th. Men who worked on the building included George Newhouse, Knut Rinde, Will and Frank Franks. 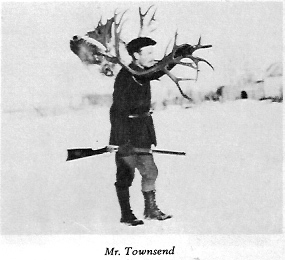 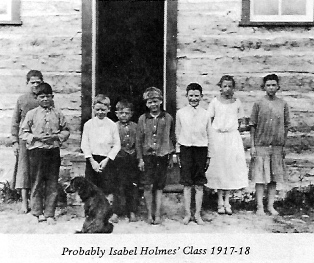 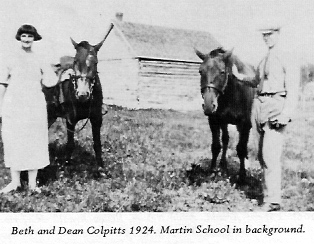 The first teacher we can recall is Mr. Townsend 1915; followed by Mrs. Isabel Holmes in 1916 and again in 1918. The school was closed for a period of time because of the shortage of teachers, caused by the first world war, and the children were transferred to the Frog Lake school.

Miss Dorothy Tennyson came to teach in 1922 and in 1924 Mrs. Beth Colpitts, from New Brunswick, was hired by the school board. Mr. Jimmy Watt 1925; Mr. Harvey Fish, from Elk Point; Mr. and Mrs. T. Carmichael; Mr. Dean Colpitts, 1927; Mrs. Beth Colpitts again taught 1931 - 32. The school, like the other rural schools in the area, was operative from May until Christmas with a week or two holiday during the end of July. Each year the highlight was the Christmas concert, enjoyed by both children and parents. In 1928 the children from Heinsburg were transported by Mr. Tom Womacks in a horse drawn van. They attended Martin School until Christmas 1932. 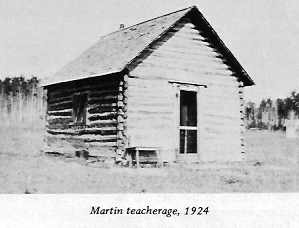 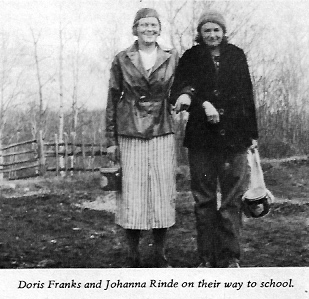 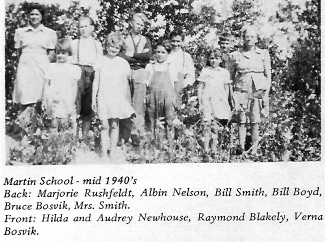 The following teachers lived in the little teacherage- Miss Anne Andrishak, 1937-38; Miss Muriel Gardiner, 1938-40; Mr. Lawrence Modin, 194041; Miss Ruby Reishus 1941 and Mrs. William Smith until 1948 when the school was centralized in Heinsburg and the Martin children were bussed in.

Our first telephone was a barb-wire line between a few neighbors. Then came the local telephone that joined all the Martin District together by phone. We supplied our own poles, usually spruce or poplar. Pete Bosvik bought the old 1885 telegraph wire from Dr. Miller of Elk Point. Dr. Miller had previously purchased, from the government, the portion of the old telegraph line between Lindberg and Frog Lake Post Office in order to keep in touch with the people of this area and Mrs. Harry Bowtell became telephone operator to Dr. Miller. It was a big, heavy wire and he let us have it for $95.00, including whatever poles we could salvage. By this time the A.G.T. had installed phones in Heinsburg which gave us telephone contact with the rest of the country.

We purchased second-hand telephones and hardware, cross bars, insulators etc. from districts that had been contracted by the A.G.T. We put up the line and installed the phones ourselves. This was only a local party line, not connected with a central; each patron had his own ring and each was responsible for keeping a section of line in repair.

These phones served us several years until the A.G.T. asked us to form a mutual and we joined the central at Heinsburg, still using the same old phones until they were replaced when the line was taken over by A.G.T. and replaced with underground wires. In 1975 extended flat rate to Elk Point was granted and in April 1976 Direct Distance Dialing will come into effect.

The name Martin district is kept alive by the sign "Martin School" on the school bus and by the Martin Goodwill Club. However, as the bus signs wear out and are replaced, the district names are being discontinued.