Fort George Museum, owned and operated by Steve Andrishak, contains many artifacts of historic significance. Some he has collected himself (at Fort George and elsewhere), while others have been donated or loaned by interested people.

Among the latter are the five items pictured here. The red tunic, hat and spur were worn by Corporal Bob Chanler. On the tunic shoulder are the letters RNWMP. The "Royal" was prefixed in 1904. Bob came to Canada from England and referred to himself as "Liverpool Irish." He joined the police in 1903 and served until 1906. The force patrolled the area between Onion Lake and Saddle Lake. He homesteaded N.W. 24-56-5-W4, east of the present day Salt Plant at Lindbergh, which now belongs to Donald Lorenson. Above the gate was the sign Coyotes Rest. In World War I (1914) he again joined the police. Later he returned to his farm and remained there until his passing in the 1950's. Many will remember his close call with the "dead" bull, Percy. 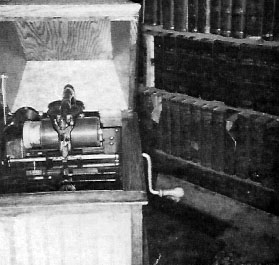 The Edison phonograph, in very good condition, was donated by Frank Franks. Frank had purchased it for Grace shortly after their marriage. Other items were given by him, including a Bible, dating back to the 1600's, old guns, and a Hudson Bay Company axe which he plowed up about 1914. It was near a camping site on the old Fort Pitt Trail, through the Frog Lake area. 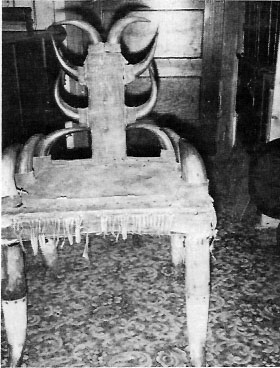 The chair, uniquely constructed with eight pair of horns, was donated by Emma Bowtell. There are many, many more items in the museum, which stands at the intersection of Highway 41 through Elk Point, diagonally across from the medical clinic.