In the spring of 1929 my dad went to Heinsburg and worked for A.B. Nelson. In the fall he came back to Camrose to pack up and get Mother and I. Dad shipped most of our things on the box car (C.N.R.); he took household effects, cattle, horses and machinery. Later he went back and drove up with team and hay rack on which he brought the chickens, turkeys and our old dog, which I had many good times playing with. Mother and I came by car. I was eleven years old when the Corniluis', good friends of ours, brought us to Heinsburg. Not knowing the road out Heinsburg way, getting in there late at night and it being real foggy, we nearly drove into the river. I can hear Mother yet, shouting, "Stop, Bert, the river!" After all piled out, we found the front wheels touching water. Dad was waiting on the other side for us. We rode across the ferry with Ole Johnson who was ferryman. We spent the night in the hotel, and I, feeling quite ill, found out next morning that I was all broken out with measles. Anyway, Dad got the box car unloaded and we got moved out to our first home there, known as the Gerhard Gunderson farm. 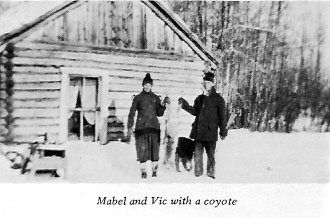 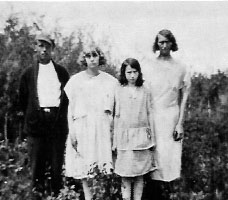 We had a lot of fun living there. Oscar Gunderson came over a lot, playing cards or pranks of some kind. Later, while we were still living there, my Grandma and Grandpa Krider, Aunt Avis and Uncle Sam moved up from Sheyenne, North Dakota, and spent the winter with us, so a lot more good times were had by all. I had now started to Norway Valley school. Gus Brocke was my teacher; a very good teacher, too. I also had made many good friends - the Helgersons, Parenteaus, the Thorson girls, and one I really chummed with, Clara Tweed. Two years later we moved to the Julius Gunderson place, and that's when Ina Corniluis from Camrose came to stay. She stayed two years with us, and as I had never had a sister or brother, I would say we were like sisters. She being my age, it was nice to have her company walking to school.

Our next move was spending some time at my aunt and uncle's place (Clarence Vinge's), later moving to the old Kleven place down on the river bank. That was a hard winter, 1932. In October I had an appendix operation. While in hospital I had a new cousin born there, Della Vinge. Then, in December, Dad had his appendix operation, getting pneumonia afterward. He spent six weeks in hospital. While Dad was in hospital Grandpa Krider died up there. Mom and I being home alone, it kept her busy hauling straw for the cows, keeping the water hole chopped open for the cattle, cutting wood for the two stoves and once a week hitching up the team and driving into town, down the river road. Mom would take her two or three pounds of butter a week in to sell at J.P. Gregor's store, for which she would get twelve cents a lb. - our grocery money for a week. Coffee was ten cents a lb. We would get a bottle of coal oil for ten cents, enough to fill the lamp and lantern for a week.

One morning after Dad got home from the hospital, but was still in bed at home, Mom found a coyote laying in the straw pile with a trap on his foot. He started to run. Mom went after him and chased him about a mile through the snow banks, until he got the trap tangled around a tree. Dad came behind and shot him. Mom threw him over her shoulder and home she went, both she and Dad being pretty tired when they got there. We got $5.00 for the hide so we really could go to town then. Next spring we moved to the old Atlas place. That is where my sister Phyllis was born in 1935. I was eighteen years old then, so it was quite a thrill to get a baby sister. 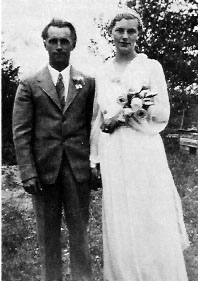 In the fall of 1936 I met Art Cook, who was working for Oscar Gunderson, and on July 2, 1938 we were married. Mom and Dad were living on a C.P.R. quarter where they had cut logs and built themselves a house. A cosy home, but Art and I lived in a tent for the rest of the summer. Dad never had any luck getting his land broke, so he gave up and moved to Cold Lake in 1940, to work in the Lakeview Hotel tending bar. In 1937 my brother was born, but passed away at the age of three years.

My folks have moved a lot - to Athabasca where Dad worked on the gas line, to Edgerton, Alberta where he worked for thirteen years in Wainwright Army Camp, and to where he is now retired, Camrose, Alberta. I, too, have seen a lot of country. I have five children, all but one are close to me in Camrose. My eldest son, Lorne, lives in Lethbridge, Alberta, and has two boys. I had two children from my first marriage, and three from my second husband, Bill Mitty. We have nine grandchildren. My sister, Phyllis, has two boys. So in all, we have many happy memories of the good old days in Norway Valley when I was a child.