We were living in the Turkey Hill district near Vermilion when Dad decided to homestead at Frog Lake. We loaded everything onto wagons, hooked the teams up, got the cattle strung out behind with some of us driving them, and away we went to the promised land. Dad and brother Wilfrid had gone up the previous winter and put up some log buildings. When I think back Dad must have homesteaded that quarter in the winter when the ground was covered with snow. Surely he would not have taken it if he had seen the rocks!

I remember when we got to the south side of the Frog Lake Reserve Harry Bowtell, a well known personality in the country, came to our camp and talked to Dad. The trip across the reserve was something to remember. I am sure the road was started by a drunk with a blind team of horses. I recall vividly one incident where the track wound around trees, bush, rocks and hills. Dad was on the high wagon with stoves, furniture, beds also Mother and the kids, with four horses strung out. They went over a little hill and down a steep incline. Two wheels on one side of the wagon started to lift, and we who were riding behind were sure the wagon was a goner. Dad never slowed down. The wagon finally righted itself. When asked why he didn't stop he replied, "Never say whoa in a bad place". (One of his more quotable quotes)

I often wonder what went through Mother's mind when we came to the log shack on the homestead. No one gives enough credit to those pioneer women; think of the hardships they had to bear. They had to carry water and wood, milk cows, raise children and worry about educating them. No end of work and worry, yet Mother always had a song on her lips. The men had to clear and break the land, build fences, put up more buildings, improve roads and provide for their families and their livestock, but it was the women, God bless them, who had the toughest job. 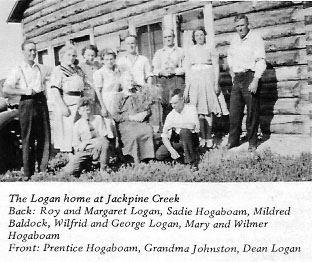 I homesteaded on a quarter away over east, this side of the line. There was a fair-sized hay meadow on it and feed was usually at a premium so Dad advised me to file on it. Actually it was about five miles from home but it seemed much further. Dad and I built a log house and barn, but these were not there very long as the summer was hot and dry and a fire burned the buildings to the ground. I never did prove up on that quarter! Ronnie Robins and I discussed going into sheep but decided the coyotes would soon make short work of them.

One summer I was haying in the meadow and at noon while the team was feeding I decided to pick some blueberries. I wandered around in the bush picking berries and suddenly looked up and asked myself, "Where am I?" I was lost. I took off on the run and pretty soon came to a meadow that had haycocks. I wondered who was haying besides me. Not until I saw my horses did I realize I was in my own meadow. This did not seem a bit humorous at that time.

Dad had ten good horses which he thought a lot of, but sorry to say they all died of swamp fever. This was a terrible blow to all of us. Not long after this the folks moved to a site near the old Frog Lake store, where they had the post office for a short time. Eventually they retired and moved to Calgary. Dad passed away in December 1972 at the ripe old age of ninety-four. Mother followed him in March 1973 aged ninety-two. They had celebrated their 71st wedding anniversary in October 1972.