Fred Bristow was born in Grey County, on October 10, 1888, the son of David and Annie Bristow. In 1900 the family moved west to De Winton, Alberta. In 1909 Fred and his father came north to Frog Lake, where they filed on homesteads. They returned to De Winton for the winter, but in the spring of 1910 they moved to Frog Lake. At that time the only homesteader in the district was Frank Franks. There were no roads, so they used an old Indian trail through the Frog Lake Reserve to reach their homestead.

The winter of 1910-1911 Fred, Scotty Crawford, Billy Jamison, and Fred's brothers, Dave and Dalton, lived in a tent near their sawmill, which the Bristows set up north of Laurier Lake. They sawed lumber for several years and sold it to the settlers. One day Billy Jamison challenged Fred to a race from the sawmill to the tent during a breakdown at the mill. Fred was wearing moccasins, and as he jumped from the steel track, he caught his foot under the track and fell across it, twisting his knee out of joint. The boys thought he had broken his leg, and carried him to the tent. When they found his leg was out of joint, two of the boys sat on Fred's chest and shoulders, while his brother Dave pulled the leg until it popped back into joint. He was on crutches, made by the boys, for the rest of the winter, so was elected camp cook. He became so proficient a cook that the following fall he cooked for twelve men on the threshing crew for fifty-two days.

Fred filed on the S.W. quarter of 19-56-3-4 on December 10, 1909. Here he built a home, and on January 12, 1916 he took a bride. It was 70 degrees below zero when he and Gudrun Benson crossed the North Saskatchewan River at Lea Park, on their way to be married at Kitscoty. Gudrun caught cold on this trip, and never recovered from it, as it developed into tuberculosis. An infant daughter was born to them July 23, 1916, but, being very premature, died shortly after birth. Gudrun lived until December of 1917. She was buried December 16 in the Frog Lake cemetery, beside her infant daughter.

On November 3, 1920 Fred married Gudrun Kraft, widow of George Kraft, and daughter of Gustav and Thora Kjenner, who had immigrated from Oslo, Norway some years before. Gudrun had one daughter, Anna, from her first marriage. Anna and Fred's infant daughter from his first marriage had been born about the same time. Fred and Gudrun were married at Knox Presbyterian Church in Lloydminster. Together Fred and Gudrun worked hard to build up their homestead. For many years Fred suffered from stomach ulcers, and Gudrun worked in the fields to help as much as she could - running the binder, haying, and doing many other jobs. She was a fine cook, and could always serve a gracious and tasty meal. She was a good gardener, and often shared her produce with less fortunate neighbors. She also loved flowers, and had one of the loveliest house yards in the district. 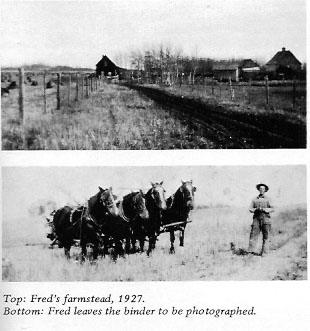 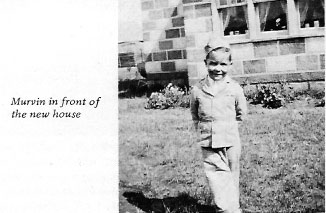 Fred and Gudrun had four children. Their eldest son, Roy, born in 1922, broke saddle horses for many people in the district. He now resides on the old Frank Franks' homestead. The second son, Elmer, lives on Fred's homestead quarter, and the youngest son, Murvin, lives in Edmonton. Their only daughter, Doris, also lives in Edmonton. As a young girl Doris was very fond of horses, and was also good at training them. She had a well-trained trick horse, named Spade, that was known throughout the district. Anna married Gershom Hockin and they resided in Vancouver for many years. Gershom passed away in 1970, and is buried in the Frog Lake cemetery.

Fred and Gudrun retired from the farm in 1962, and bought a little home in Elk Point. Here Gudrun's love of flowers was again evident in the lovely yard around her new home. She passed away on February 22, 1969 and Fred passed way on March 13, 1914. Both are buried in the Frog Lake cemetery. 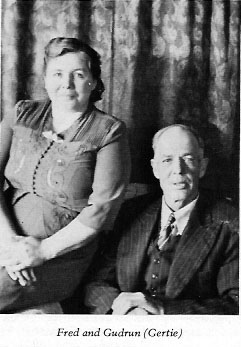 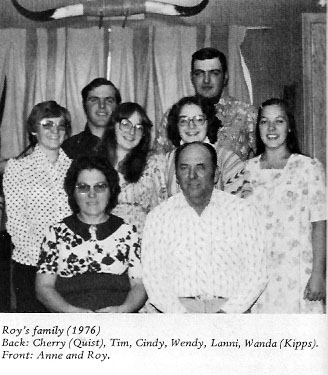 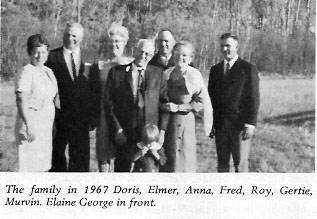 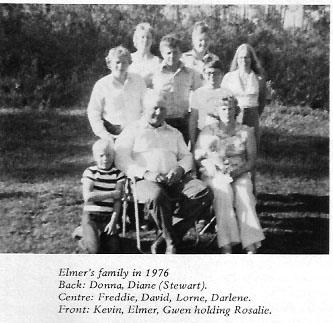