I am the oldest son of Sam Faithful and Marie Ann Stanley. My grandfathers were Thomas Faithful, whose Indian name was We-ap-pan-otum, and George Stanley who was named Me-sun-ekwak-pan. Thomas Faithful's sister was named Alice. My father passed away about twenty years ago, a short time before my youngest brother, Sam, was born. 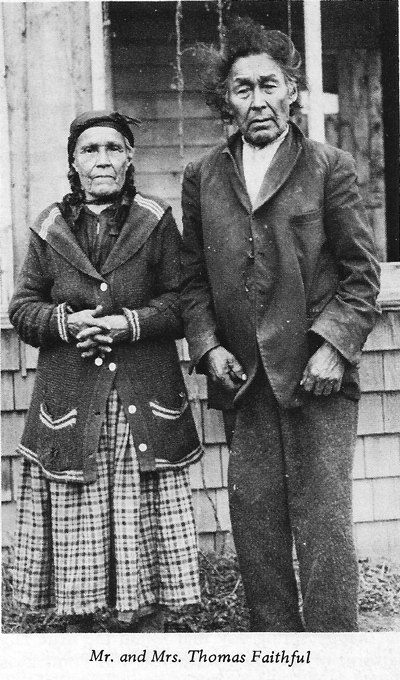 I was born on the Unipouheos Reserve and I have always lived here. My father worked for the white people around Frog Lake, brushing, picking rocks and roots, burning brush and stooking and threshing. Sometimes he went across the river and worked for Mr. Isert who lived near Dewberry. He also worked for Bill and Jack Cross on their farms north of Islay. Bill was known as W.W. Cross and was in the Government at Edmonton. I have been told that he was Minister of Health. My father also trapped and sold furs in the winter, and did a lot of hunting and fishing. 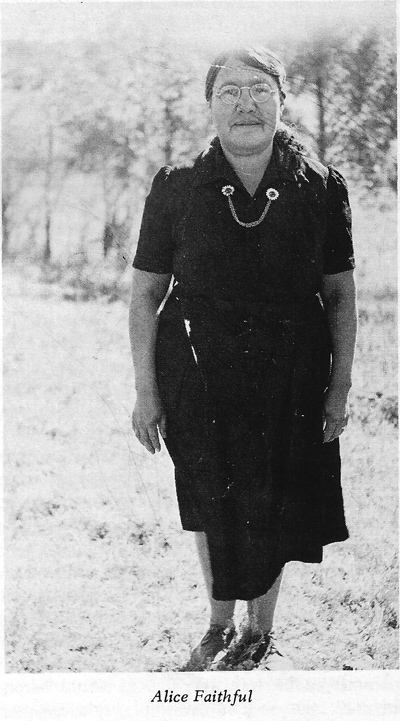 My brothers, sisters and I went to the Anglican Day School on the Reserve. Mr. Hunt was my teacher. I never learned to read or write very much because I missed so much school. When my father worked away from the reserve he usually took his family with him and we camped wherever the job was. I learned how to do hard work but school was neglected. I have tried to see that my children go to school because I learned that education is important.

I married Philomena Belly who came from Little Island, Saskatchewan. Her father was Isadore Belly. She had four children, Angeline, Pauline, Rodney and Hubert. My children are Annabelle, Laverne, Viola and Hubert. Two of them go to the north school and the other two are going to the south school. When the new school is completed they will go there.

The white people seemed to think that Philomena and I weren't married and that our children were illegitimate, but we were married in the way of the Indian custom. The woman keeps the name of her father or mother. To please our church and the Government of Canada we were married two years ago by a United Church minister who came to visit us from Saskatoon. I work for the local farmers as much as I can.