Jack Litchfield came to Frog Lake from Magnolia, Maryland, in July of 1912. He walked in from Kitscoty, forty-five miles, carrying suitcases and a fiddle. He reached his sister and brother-in-law's tent exhausted, but after a "feed" of moosemeat and a rest, he felt as good as ever. One recuperates quickly at the age of twenty!

Howard and Bess had taken up a claim a couple of years before, as had Howard's father, "Pa" Taylor. Jack proceeded to build a log house, horse barn, cow barn, shed, pig house, machine and tool shed, hen house and a shed for sheltering and feeding young stock and other cattle wintered outside. 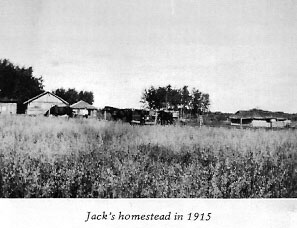 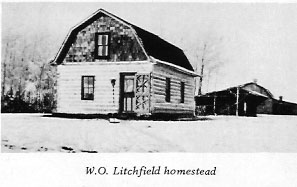 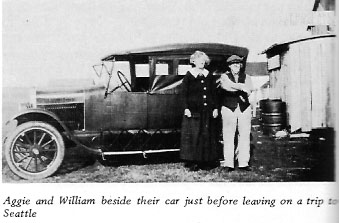 His father, William 0. Litchfield, and mother Agnes and young sister Mercy came from the East a couple of years after Jack; took up a claim next to Jack and built a log house, barn, and outbuildings - and both started breaking up the soil and farming. The breaking up of the sod was done, first with oxen and later with horses. Wheat and oats were the main crops, but pigs were the money makers for them.

Nelson Litchfield and wife Anna (Annie) came from Seattle a couple of years later, filed on a claim west of Jack's place, built a big log house, barn and sheds. This house burned to the ground around 1927 while they were at a dance. They built a smaller, lumber house. Nelson and W.O. Litchfield were both first rate carpenters and boat builders.

Jack married Linda Richter, a school teacher from New York State, via Shamrock Valley, in 1920. She had taught the Frog Lake School the preceding two years. Jack rented his farm and started hauling freight for J.C. Lewis' store at Cold Lake, having first built one of rough lumber with spikes at Frog Lake. Lewis and his partner, Billy Clark, had come into the neighborhood with plans for stores at Cold Lake and Lake Primrose.

Jack hauled supplies for the Cold Lake Store, camping along the trail, having fresh-killed partridge and prairie chicken to fill the frying pan, and lend variety to the contents of the "grub box" which all travellers carried. There were no roadside hamburger joints between Frog Lake and Cold Lake, and it was a long, rough eighty miles.

In November, 1920, Jack bought the Frog Lake store from J.C. Lewis, who was a most colorful character; claimed to be part Blackfoot and said his Indian name was "Black Beaver". He looked the part, tall, dark, with piercing black eyes and raven black hair. Said he was 57 years old, bragged about his athletic prowess, could walk on his hands as easily as we walked on our feet, could flip hand springs and do cartwheels like a professional. And his ability with a six gun was like unto the present day gunslinger. He professed to have been a U.S. Marshall, stationed in Alaska at one time. Undoubtedly he had been around and was still going places. He had a very mild mannered brother who worked in the store. They left for Seattle, or points south, after selling the store.

The store was really a trading post - we dealt in everything from lace to lumber. The "drummers" used to stop by with their sample of the two year old "latest" - for we were always at least two years behind with styles. We bought furs from the Indians; coyote, fox, mink, muskrat and weasel. We traded for moccasins and mittens, hand sewn, of course. We learned enough Cree to converse on ordinary subjects - roads, weather, travel, food of all kinds, cattle, people. The mistakes made by both parties were sometimes very funny.

Jack brought our freight from Kitscoty in our faithful old Model T truck, plugging along at twelve miles per hour! The perishable canned stuff was kept from freezing in below zero weather by lighted lanterns under the tarps.

In the winter our social life was dancing - at Norway Valley, Mooswa, Ferguson Flats, and of course, in the hall above Harry Bowtell's granary. Occasionally a party or dance was held in the Frog Lake School but this was before 1920. Some of the dances we used to do and which I don't think young people of to-day know: quadrilles, of course and the English Lancers, the three step, seven step and the Jersey. Of course the one step and fox trot followed, and naturally, the Charleston. 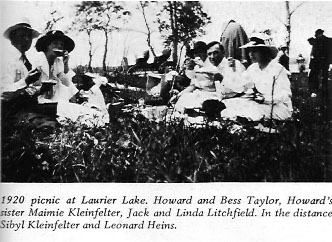 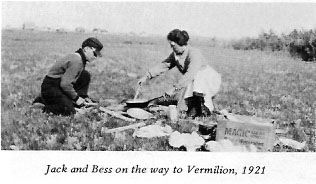 The school house always served as the church, our minister a "missionary" sent up from the Home Mission Board, probable based in Philadelphia, Pa. The Presbytery Governing Body sent the young students, many of whom had two more years to go before being ordained. Occasionally an Episcopal minister was sent out to our territory, and then the Church of England worshippers met at whatever place was designated.

Many of the dances were strictly benefit dances - for the Red Cross, for our baseball or hockey team. The contending teams were Lea Park, Mooswa, and Elk Point.

Picnics, with all kinds of races for grownups and children, were part of the summer fun. The baseball game was usually followed by a dance. The platform for dancing laid in advance was then torn up - music over. One of the winter indoor sports was boxing in the Frog Lake Store; the young men coached by Jack and cheered on by the ladies who hung over the bannister. After the boxing was over and the showcases moved back into place â the apple boxes which had been brought into the house from the back porch and warmed, were used as chairs for the tables of Norwegian Whist which were fiercely fought over, - lost and won! Checkers were popular with the men who had a perpetual contest among the players. The coveted prize money was won by Alex Peterson who was a newcomer to the game. Charades were a favorite, and an occasional evening of excellent piano music, a real treat given us by Mrs. C.A.R. Lawrence, wife of a civil engineer, who with his gang was building bridges. Mrs. Lawrence was a graduate of the Boston Conservatory of Music, but she could play jazz in a way that set the furniture to dancing.

A few "home talent" plays were fun for the actors as well as the audience and made welcome additions to the Red Cross Treasury. The new hall at Mooswa was not quite finished when the play, "The White Shawl" was presented there. Horse racing was a great sport; the Bristows had beautiful horses and it took a good one to beat their best, if ever they were beaten!

Everything in the early days moved so much more slowly, but I wonder if any of the then young people did not enjoy the slower sleigh ride to a dance, with the moon so bright, and perhaps the Northern Lights to add to the beauty of the night, more than the young people whipping along the good roads in the fast new cars? A sigh for the old days.