David G.S. Thomson, my father, left the Sunnynook district near Hanna, Alberta, and after some travelling and a short course at University of Alberta, got a job as weed inspector in the Marwayne area. Wishing to settle down again, but not wanting to go into debt, he homesteaded the N.W. - 10-57-4-4 in the fall of 1929. The original house still stands but is no longer occupied. He was born in 1889 in Georgetown, British Guiana, South America, and spent about half his childhood there and half in London, England. He crossed the Atlantic ocean five times as a boy. He immigrated to Canada and homesteaded in the Delburne district, near Red Deer, Alberta. Because of his age, he had to re-file his homestead again at the age of eighteen. In 1919 he moved to Sunnynook.

My grandmother, Mary Louisa Thomson, joined him at Primrose in 1930 or 31. She kept the home fires burning while Dad worked as weed inspector in summer and cut logs and timber in winter. Her homestead was S.W. -15-574-4. She was born in 1866 in Georgetown, South America, also, the daughter of a sugar plantation owner. She came to Delburne about 1911 with her youngest son Douglas and, when he took up his homestead, she divided her time keeping house for her two sons until her arrival in this district. 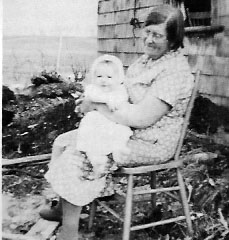 My mother, the former Lily Haskell of the Riverton district, and Father were married in 1934. This was right in the middle of the "dirty thirties." They didn't have many of the modern conveniences we have now. It must have been tough to raise a family in those days. I have three brothers and one sister. Mother was born at Metiskow, Alberta in 1914. Her parents had come from Denmark when she was quite young. Her homestead was the S.E. 9-57-4-4. Women could prove up their homesteads without having to live on them.

Gradually a small herd of cattle was built up. The cream cheques weren't very big but they helped "keep the wolf from the door." During the years as we were growing up Dad worked as weed inspector and pest control officer in the local improvement districts bordering Lincoln, St. Paul and Bonnyville Municipal Districts. Mother kept the farm going, and Grandma kept house. We also had the Primrose Post Office for a few years, and hauled the mail from Lindbergh. Getting our education always seemed to be a struggle. We were always a long way from school and most of the time had to provide our own transportation. This consisted of saddle horses, team and cutter, bicycles, on foot or an old car. School buses came only in time for the last two or three years of school at Heinsburg for my younger brother and sister. 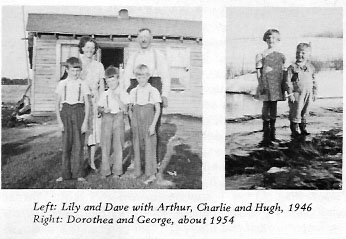 Grandma passed away in 1956, and mother in 1957. Arthur started his teaching career about then out of Edmonton. He later taught at the Frog Lake Indian Reserve School for a couple of years, and while there, he married Aggie Lastoki, who was also teaching there. Hugh stayed on the farm for a couple of years while I attended college at Vermilion. When I returned home, he went out on his own, and has since married and has a home of his own. Dorothea and George were still quite young when Mother passed away, and they had it kind of tough without her. But somehow they finished their education and are both married now with homes of their own. Dad and I stayed on the homestead and batched until his death in 1971. Later that year Connie (nee Ferguson) and I were married. We lived in Heinsburg for a few months and then moved to our new home on the same parcel of land my dad homesteaded in 1929. We have four children, Chris, Kim, Henry and Lily. Connie is teaching school in Heinsburg. We operate a school bus and are raising a few cattle on our farm, which consists of Dad's, Mother's, and Grandma's homesteads, and one fraction that was first homesteaded by one of the Gundersons. We enjoy many good friends and neighbors in all the surrounding districts and plan to live here a good many years to come. 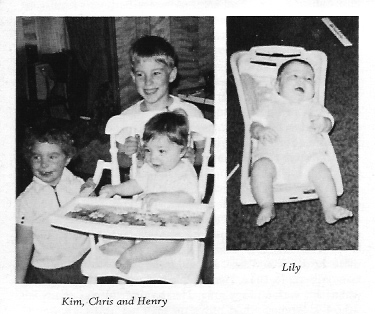