Mr. & Mrs. Harry Hulvar Hockin moved to Frog Lake on July 30, 1931 from Kelstern, southeast of Swift Current, in the dust bowl of Saskatchewan. They first lived on a farm rented from Mr. Litchfield, later moving on the old Jones place. They lived here in the north until April 27, 1935 when they returned to the old farm in Saskatchewan. They moved to Langley, B.C. on March 24, 1944. Mr. Hockin passed away on April 21, 1953 at the age of 72. His wife died April 7, 1960 at the age of 78. They had a family of four boys and three girls. 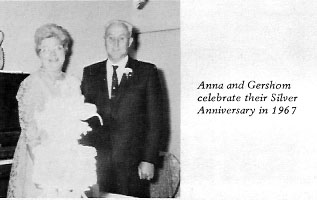 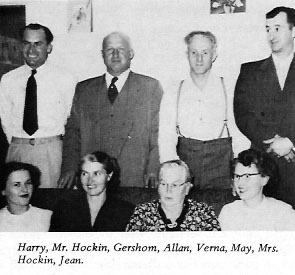 Jack, the oldest son, married Marguerite Chartier of Heinsburg on October 3, 1936. They lived in The Pas, Manitoba, where Jack was in business. He died November 1, 1964. He left, besides his wife, two daughters, Joan and Adriene, both married and living in Kamloops, B.C. There are three grandchildren.

The second son, Gershom Francis, and I were married December 4, 1942 in B.C. He served overseas with the Canadian Scottish Regiment. He was wounded twice and taken prisoner by the Germans. He returned home in 1945 and worked for twenty-eight years for McMillan Bloedel, his duties involving fire protection work at their large lumber mill. He passed away September 14, 1969. We had no family.

Harry, the third son, married Frances Murphy in Toronto in 1943. He has worked as a mechanic. Allan, the youngest, married Betty Cameron. They live in Terrace, B.C. and have two daughers and four sons. Jean, the oldest daughter, is a school teacher. She married George Thompson and now lives in Ontario. Their son and daughter are both married.

The Hockin boys were active in baseball and hockey while at Frog Lake.