Mr. and Mrs. Kleven came to the United States from Norway in 1906. In 1911, Vraal Kleven and his son-in-law, John Thorsen came from Minot, North Dakota to look for homesteads in Canada. They filed on homesteads near the North Saskatchewan River. When school districts were established their land was in the Norway Valley School district. They returned to the United States and the following year moved their cattle and belongings to their new land. Mrs. Kleven and her youngest daughter Vena, then eleven years old, came by train to Kitscoty. Traveling with them was her oldest daughter, Mrs. John Thorsen and her two young daughters, Thelma and Dagne. They travelled out from Kitscoty by wagon. Settling in a new land had certain surprises. Seeing a bear caused a lot of concern. When a paddle wheeler came down the river, they were sure it was the Indians coming.

Being of Lutheran faith, the ladies of the district gathered at Mrs. Kleven's and other homes for ladies-aid meetings. Their purpose was to arrange for Summer Bible Classes and help raise money to build a church. Mr. and Mrs. Kleven's son, Gunder settled in the North Park district. 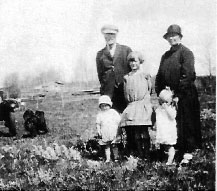 Mr. and Mrs. Kleven with grandchildren Iver, Violet and Anne