Nelson Litchfield was born November 11, 1879 in Baltimore, Maryland U.S.A. He and his dad went to Nome, Alaska, 1898, in the time of the gold rush. After that Nels went to Seattle, Washington for a while and returned to Magnolia, Maryland and married Anna Myers on March 7, 1911. She was born on August 9, 1887 in Magnolia, Maryland and had lived there all her life, till they went to Seattle, Washington after they were married. He was a fisherman and a carpenter. At Christmas time 1913 he came to Frog Lake to visit relatives. The following spring he returned to Frog Lake and homesteaded N.E. 26-56-4-W4th. That is where he stayed the remainder of his life. His main interest in sports was to go on a hunting trip every fall. Many times he and his companions would go as far as 100 miles north with team and sleigh in search of moose, elk, and caribou. 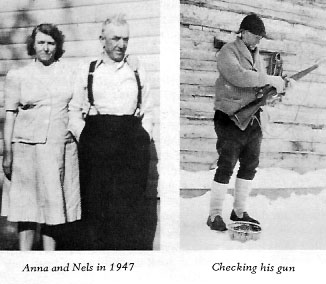 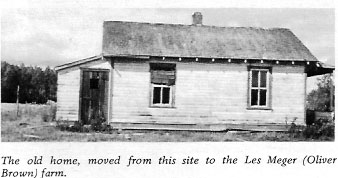 Nels and Annie had many friends and were always full of fun. They often had house parties with music and playing cards. Nels had one of the first radios in the district. He never did much farming, but had a few cows and horses. He did quite a lot of carpenter work. They never had any children. Annie was sickly the last year or two of her life, but Nels was quite active right up to the last. Annie died November 15, 1956, and Nels on January 30, 1961. They are both buried in Frog Lake Cemetery.