Oscar Gunderson was born in Lac Qui Park County, Minnesota, U.S.A. in 1892. In 1910, Oscar and his brother Julius came to Vermilion and each filed on a homestead south of Claysmore. Oscar's brother Gerhard and his family had settled in what was then called the "Norske" settlement. In 1919 Oscar sold his homestead and bought a farm from Mr. Snaunes. This farm was next to his brother Gerhard's place and close to Lake Alma. The next year, the people of the district formed Norway Valley School District. They hired Mr. Gunder Brocke to teach, and he held school in the main part of Oscar's house. Oscar didn't mind living upstairs for this school year as he had nieces and nephews attending. A new school was built and ready for the next year.

Until 1923, I had lived with my parents, Vraal and Dagne Kleven, and had also worked in Kitscoty and Lloydminster. On March 16, Oscar and I drove in a one-horse cutter to Elk Point and were married by the Lutheran minister at his manse. We have three sons. Iver, born in 1926, Vernon in 1929, and Norman in 1932. In 1933, the house was moved from close to the lake to a new site, one half mile east. It was moved on rollers using a horse-powered capstan. Oscar served on the school district board for many years. School picnics at the end of the school year were always enjoyed. First one and then a second ice-cream freezer was purchased by the community so we could have home-made ice-cream. Anyone could use these for their own private gatherings as well. 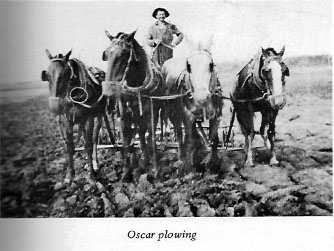 Oscar in his oat field 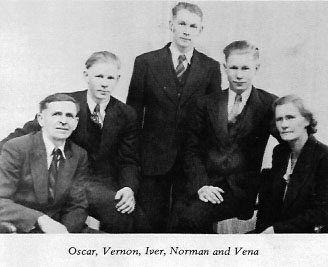 Oscar bought a quarter section one and a half miles from home. This was the Andrews place. During long periods of field work, using horse power (no tractor then), he would stay in a granary there. His favourite recipe when cooking for himself, and which ever son happened to be with him, was Mulligan stew. The boys enjoyed it and got a kick out of Dad having to cook. Oscar passed away in 1960. I reside in my own trailer home in Iver's yard. Iver married Doris Barstad and has his own farm. Vernon married Fay Vaness and also has his own farm. Norman married Elaine Curtis and lives in Lloydminster.