My grandfather, William Robinson, homesteaded at Frog Lake in 1922. Coming from the United States into Saskatchewan, he then decided to go farther north to Frog Lake. He came to the district with a team and wagon and what worldly goods he could carry by wagon. He had a hard life as my grandmother had passed away at a very young age, leaving him with three small children to raise. 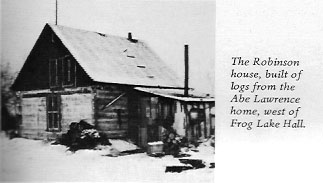 He built his home across the road from the Grangers on N.E. 13-56-4-4. They knew him very well. Whenever their mother lost track of the younger children the first place she looked for them was at Grandpa's. They used to go to his place and play cards and checkers with him. I think he enjoyed it as much as they did.

He used to spend a lot of evenings at Grangers playing checkers with Abe or cards (casino) with old Mr. Granger. They had a big wooden box that Mrs. Granger used as a bread box. Quite often it was used as a chair, but when she took her bread from the oven she covered the box with a hundred pound flour sack tea towel and turned the bread upside down on it. One evening Grandpa came in, I guess she was used to him coming in at odd times, so she said to him to find a place to sit while she finished getting supper ready. Without looking he sat down on the bread, hot from the oven.

Grandpa loved his horses and got along with all his neighbors, both red and white. He had a team called Baldy and Fanny. He had a voice that carried a long distance and on a clear frosty morning his neighbors would hear him call, "Come Fanny, Come Baldy." In a short time the willows in the slough, north of his house, would begin to shake and home came Baldy and Fanny.

His old log house still remains a landmark, where Sunday school was held for a time. The Frog Lake School has been moved beside the log shack. It is now used for the Full Gospel Community Church. The ministers used to live in Grandpa's house. He left Frog Lake in 1929 and went back to the States, to Glendive, Montana, where he passed away.