Emmanuel Meger was born in 1907 in East Prussia, emigrating as a very small child, with his parents, to Saskatchewan in 1910. His wife, Martha, had also emigrated with her parents from East Prussia in 1910, settling in the Biggar district in Saskatchewan. Emmanuel and Martha were married in Biggar district in 1931 and farmed in that disctrict until their move in 1946 to Frog Lake, Alberta.

Their family, like many others, experienced hardships during the "dirty thirties", when farm produce earned next to nothing. However, the farmyard included two ponds, where the family enjoyed many hours of good swimming, and happier recollections also include many baseball games (nobody could outrun Emmanuel), berry picking expeditions, skating parties, coyote hunting, and trapping. 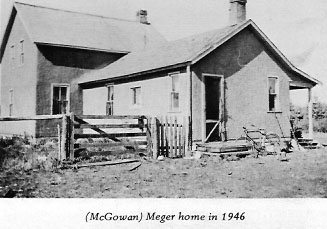 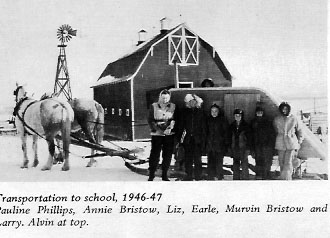 In the summer of 1946 Emmanuel and Martha moved, with their six children (five sons and one daughter) to the George McGowan farm in the Frog Lake district. They soon became active members of the Frog Lake Community Club and of the Bethel Lutheran church at Lea Park. Mr. Meger served for many years as trustee and president of the Bethel Lutheran church congregation. Mr. Meger also served as trustee, and later chairman of the Heinsburg School District.

During their first school term at Frog Lake, the Meger children walked or drove the two and one-half mile distance to the Frog lake country school - a one-room school unable to obtain the services of a school teacher. That year they and the other children completed their grades with correspondence courses, assisted by the school supervisor, Miss Pauline Phillips. That winter the Megers' "caboose" transported four of the Meger children, Miss Phillips, and often Murvin and Annie Bristow, with Larry and Liz taking turns being towed behind the heated rig on a pair of skis. When the Heinsburg school became centralized the following year, with students bussed in from outlying districts, the skiing and tobogganing activities of the Meger children continued on the Frank Bristow hill.

With a big slough on their own yard, Emmanuel and his children enjoyed skating in winter and swimming or rafting in summer. Idleness was not tolerated in that household, however, and the children were all required from an early age to help with all the land work, including rock picking, gardening, livestock feeding, barn cleaning, cow milking, machinery repair, and so forth. Liz was required to do housecleaning, baking, feed chickens, haul water, cook and do dishes. With the exception of cow milking and gardening, there was a definite distinction between "man's work" and "woman's work."

The Meger garden was always a large one, and in the fall the whole family would be put to work digging and hauling in the potato crop. Then the famous sauerkraut barrel would be filled with shredded cabbage, pounded down firmly by Emmanual with a large wooden "stomper" carved by himself from a log. Eventually the sauerkraut would be packed into large glass jars, to provide Emmanuel's staple winter vegetable. Although Emmanuel loved fresh peas and carrots from the garden, he refused to eat canned vegetables and relied on sauerkraut, dill pickles, and salads. Often one or more of the children would ask why they had to eat a disliked vegetable, since their father did not have to.

Emmanuel and Martha loved berry picking, and they spent many hours gathering blueberries, saskatoons, wild strawberries, etc. for preserving. Emmanuel was always out following a rain shower, as well, hunting down edible wild mushrooms, which Martha would spend hours over, salvaging the small bits not invaded by maggots.

Martha loved flowers, and her flower garden was a thing of beauty. As well as the hours spent weeding and digging, hours were spent each fall digging up roots and bulbs and plants that could not survive outside in the bitter winter cold. The following spring more hours would be spent replanting.

Emmanuel and Martha always had extra milk, if needed, for neighbors wanting any. Their home became known as a hospitable one for ministers of the Full Gospel mission, who would rent garden space, come over for milk, or simply come over for a visit, a meal, or a game of scrabble. Emmanuel left the district the undefeated scrabble champion. They also welcomed to their home teachers from the Frog Lake Reserve schools, who found the Meger home a "home away from home" during their stay in the district.

Martha, who had learned to prepare many traditional German dishes from her mother, was known as an excellent cook. Her potato pancakes and cheese pancakes were truly mouthwatering. Her family also enjoyed her phlinsen and kliesel. No one could match her apple pies, either. Small wonder that the family continued to visit so often after they had grown and left home. 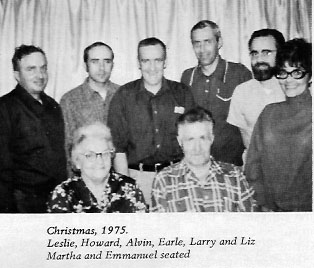 In the spring of 1973 Emmanuel and Martha sold their farm and retired to their new home in Camrose. The adjustment to town living was not made easily, and Emmanuel continued to drive back to his son's farm at Frog Lake frequently to help out with cutting fence posts and sharpening and treating them. Frequent fishing expeditions to Ross Lake (with remarkable success) highlight his visits to Frog Lake, as do blue berry picking expeditions. Emmanuel and Martha continue to grow large vegetable gardens in Camrose, and Martha continues to grow flowers - indoors and outdoors. Their home in Camrose, like their former home in Frog Lake, continues to provide warm hospitality to visitors from far and near.

The Meger children have all retained their fondness for the Frog Lake countryside. Alvin, the eldest, married Grace Botting in 1953. Their family of six boys (Rick, Wesley, Jeffrey, Burt, Tony, and David) has over the years contributed greatly to the success of local hockey and fastball teams. Alvin has been employed at the Lindbergh Salt Plant since his marriage, and has continued farming the Botting farm as well.

Lawrence (Larry) married Jean Norris (from St. John's, Newfoundland) in 1964. They and their three children live in Edmonton, where Larry has been employed for many years by Rempel Trail Transportation. Most long week-ends will find all or part of Larry's family visiting at Frog Lake.

Elizabeth (Liz) married John (Jack) White (from Halifax, N.S.) in 1958. They lived with their one son, Paige, in Edmonton and Vancouver until Jack's retirement from the Canadian Forces in 1974, at which time they yielded to Paige's urging and moved to the Frog Lake area to join Leslie on his farm. Liz is presently travelling back and forth to Elk Point, where she is employed as a nurse at the municipal hospital.

Earle, married for several years to Natalie Ledgerwood, currently enjoys batchelor status in Edmonton, where he has been employed for many years as computer programmer with the Alta. Liquor Control Board. His three daughters visit from time to time, and enjoy their visits with him to the farm in the Frog Lake district.

Leslie, a staunch bachelor, has remained in the Frog Lake district, farming for many years with Emmanuel, as well as farming land he purchased (the Litchfield and Gordon McMullen farms). Summer weekends will find Leslie coaching the Heinsburg fastball team to victory at the many local fastball tournaments.

Howard, as yet a bachelor, too, had spent his past eight years teaching school at Tofield, Alberta. The past year he has spent "taking a break" from teaching, and has been living with Leslie and the Whites on Leslie's farm. He intends to resume teaching in September, 1975. 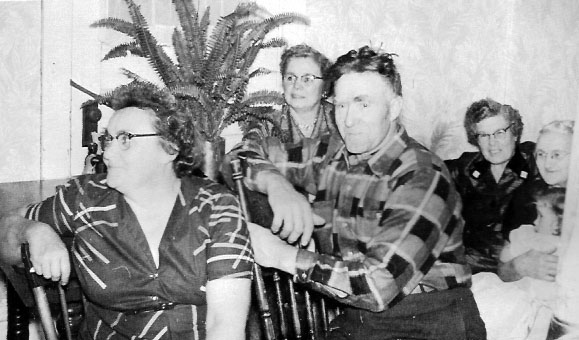 with Kittie Granger at a gathering of friends and neighbors in the E. Meger home.