We arrived in Kitscoty from Spokane, Washington on March 8, 1914 and were brought to Bishopp's by Scotty Crawford via team and bobsleds. Dad, Evan T. Evans, was born in St. Joseph, Missouri, in November 1873. Mother was born in Bad Axe, Michigan, August 27, 1878. Brother Wayne and I were born in Beulah, Michigan; a deceased sister between us.

We were enthralled by beautiful Alberta scenery, cold, snappy weather and the warm welcome from people we met. Aunt Musetta Bishopp had filed for Dad in September, 1913 on the S.E. of 30-56-4-4. Sufficient to say, when greetings were over and a day or two passed, the business of getting out dry spruce and tamarack logs for a house 20 x 24 feet was started. We hauled them across the lakes by ox team to the building site in late March. It was then that we met our new and nearest neighbors, Louis de Delley and Fred Raetz, who had come from Switzerland some years before. 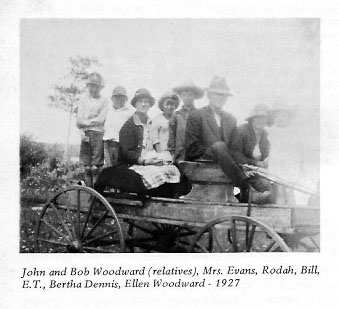 We stayed with the Bishopps until it was warm enough to live in a tent, plant a garden and work on the house. By then we had bought two cows and a team of oxen. The tent, 12 x 14 feet, was crowded with bunk beds, a Monarch kitchen range, a table and several wooden boxes of household goods hauled from Kitscoty in April, on trails that thawed in the daytime and froze at night. It was tough wheeling and it became necessary to borrow another ox team. Dad walked from the Goins' place, about halfway between Lea Park and Frog Creek, to Howard Taylor's (about another eight miles into the north west) to get the oxen. I stayed at Goins' with the wagon and slept in the attic on a cowhide under a Hudson's Bay blanket and nearly froze.

Mosquito netting hanging from the tent roof draped over the bunks, and a smoking smudge pot became a way of life. Mosquitoes were extremely numerous, hungry, and they rarely gave up. One day after a light morning shower, Dad was absent and suddenly from the tent came an odd sound, kind of a light rumble. I looked up. The smudge pot had flared up, igniting the mosquito netting and a hole, perhaps a yard square, was creeping along the slightly damp canvas and getting larger. There was no time to run the 186 steps to the creek and return with water, so climbing on the upper bunk, I ran my hand along the burning edge putting out the fire. To this day I am uncertain if I was barehanded when extinguishing the flames, but homesteaders rarely wore mittens or gloves except in winter. Dad patched the hole with a canvas grain sack. A neat job of stitching, for he was a versatile person at many vocations. Eventually we got the sod roof on the house; spruce logs cut and hauled for a stable, hay cut with the scythe and raked by hand.

I don't know much about the Bishopp family, but I do recall Uncle Alex and Aunt Musetta. Raymond was the eldest, then Mary, Irene, Dolly, Grace, and I believe, one other girl. There were two events about that family I recall vividly; the annual arrival of a barrel of dried apples from Ontario relatives, and one girl who could bawl louder and hold her breath longer than anyone I had ever seen. I know little about Raymond Bishopp.

I believe Whitney School was built in 1916 by a French- Canadian. I can't remember his name, but he made a kitchen cabinet for Mother. The first teacher was a red haired lass, Miss McKenzie, from just north of Greenlawn, on the ferry road. She had a complexion that matched her auburn hair. In 1917 the teacher was Albert Gruber.

When Mother became very ill early in 1917, my grandmother came out from Michigan, and in November took Mother and Wayne home with her. Mother passed away January 8, 1918 in South Boardman, Michigan. How well I remember that day; blustery with snow showers. Dad and I were working in the yard when Art Bowtell, the government telegraph operator, and his wife drove up. We exchanged greetings and he handed Dad a telegram, which he read and handed to me. The words are etched in my memory - "Mabel dying. If coming, come at once. Signed C.B. Doty." No doubt I harnessed Jack and Jim while Dad got ready to travel. He picked up one of the Heins boys to bring the horses home, but Dad didn't return till early March.

The night Dad came home was cloudy and looked like snow. Colonel, our dog, began raising a rumpus. I couldn't figure out why, and armed with the old shotgun, stepped outside. Colonel never liked anyone wearing a fur coat and didn't recognize Dad whom he had treed at the front gate. There were two people that the dog would not let into our yard. He was a good dog. After dinnering with the Bishopps Easter Sunday, March 31, 1918 Dad left me at Heins' store, and while it was unintentional at the time, I didn't return until August 19, 1934. A lapse I have regretted many times.

Dad remarried in 1919, this time to Mrs. Alice Dennis from Vermilion, who had two children, Fred and Bertha. There were two children from this marriage; Bill born in 1920 and myself in 1922. We lived on the homestead all through the thirties. Times were pretty lean but we always had enough to eat and time to visit our neighbors. I remember well when de Delleys bought their first radio and we would walk to their place to listen to Amos and Andy once a week. 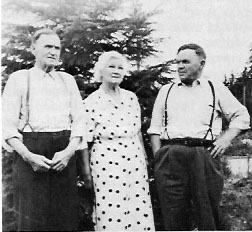 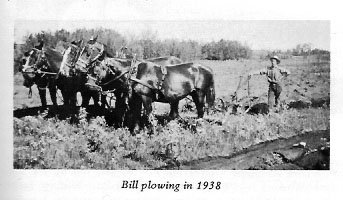 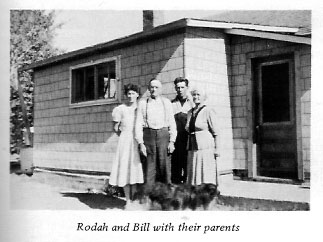 Bill and I went to Whitney Lake school on horseback. It was three miles but seemed much farther in winter when it was cold. The folks lived on the farm until 1943 when they retired to Powell River, B.C. Dad died there at the age of eighty years in 1953. Mother came back to Lindbergh in 1957 and made her home with us until her death in 1968, at eighty-four years. Bill stayed on the farm for several years and later moved to Vermilion with his wife Frances (nee Bendixen) and family.