GEORGE A. SANDERS OF CALIFORNIA

I came to Norway Valley with my folks in November, 1912. We stayed in a tent across the road from Hovey's store until ice in the river allowed foot traffic. We travelled from Lea Park to Norway Valley to a house that Dad built, which we subsequently found was on Kleven's homestead. I attended the Norway Valley school when it was in Halvor Snaunes' house, later the Oscar Gunderson home. Gunder Brocke was the teacher. I also attended school at Martin for a couple of summers.

Our family moved to the States where I attended schools in New York city; Providence, Rhode Idland; Toledo, Ohio; and Chicago, Illinois. We left Chicago in 1927 with me driving a Model T one-ton truck, loaded with furniture, to Norway Valley. I stayed for harvest, then returned to Chicago. In 1930 Pop and I left Chicago and came back to Norway Valley, where Mom and Pop finally stayed. I was married on July 21, 1933 to Elaine Laughy. She taught school at Lindbergh, Alberta in 1930 and 1931. She is a native of Czar, Alberta. We farmed Pop's homestead until October, 1936. Our home was constructed of logs, carefully built by two Finlanders â Nick and Lory. 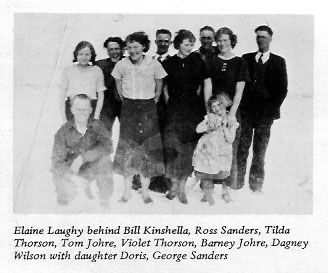 We sold out and moved to California, where we have resided ever since. We raised two children â Ross Edward and Katherine Elizabeth. On April 30, 1974 I retired from employment with the State of California as an apprenticeship consultant.