Ernie and his wife Ella and family came from Garske, North Dakota, shipping their belongings by rail to Brooks, Alberta. Then they trekked with horses and wagons to Youngstown, where they homesteaded. After working hard to prepare for winter, a real big prairie fire came along, burning all the feed. While helping to fight the fire, I have been told, George Dewey was badly burned. Ernie, getting to think he would like a change, in 1903, left Youngstown and came to Ferguson Flats via St. Paul. He stayed on the Ferguson Flats farm for about a year. Moving again he went to a farm near Lloydminster. In a couple of years they decided to get a farm at Jumbo Hill, where they stayed for a couple of years.

In 1935 they moved to Heinsburg, on the farm that Mr. Horton used to have. They raised a family of ten children, two boys, George and Lester; eight girls; with the exception of one girl they are all living today. The girls are Floy, Ruby, Thelma, Edith, Verle, Elinor and June. I am living in Elk Point now. Dad sold his farm and retired to Heinsburg. After many years they moved down to their daughter's near Marwayne, Floy and Leonard Alton. In a few years Dad was sick for a while, then passed away about 1959. Mother continued to live in the nice little house their son- in-law had built for them when they moved down there.

Then she moved to Elk Point, living with her daughter, June for a little while, then in a little house close by. She got sick and was in Elk Point Hospital, then moved to Wainwright Nursing Home where she passed away. 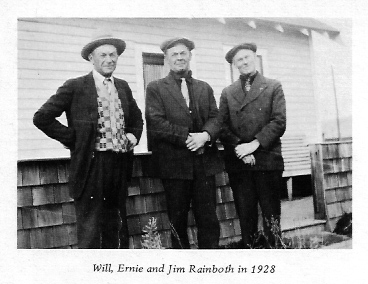 In 1940 I went to the war, going overseas, staying until the end in 1945. After coming home, I decided to farm, so bought the Scheidel place from the D.V.A. in about 1947. Then I decided to get married. Finding a nice girl, Pearl Nelson, daughter of Albert and Mary Nelson of Heins- burg, we got married in 1949. We raised a family of three, one girl Glenna, two boys Leo and Albert. My wife got sick and passed away. We moved down to Marwayne. Glenna married Brian Ward and is now living in the Tulliby Lake District. Leo is married to Noreen Lorenson daughter of Ronnie and Sheila, and lives in the Heinsburg district. Albert is at present living with me in Elk Point. I have three grandchildren to cheer me up. I remember on a Sunday we used to meet with all the neighbors, at the nearby lakes, the men getting the fish and the women the lunch, some frying the fish and the others looking after the rest, mixing the cream, etc. to make ice cream in the old fashioned freezer, each person taking his share of cream, sugar, eggs for the mixture. I think we got ice from Floyd Nelson, which he put up in the winter, packing it with sawdust. We used to have ball games, horseshoes, anything to entertain. I am living in Elk Point now, in 1975.