I am known as Joe Smith. My grandfather's name was Kahsan. I do not know where he was born but my father, William Smith, was born at Onion Lake, Saskatchewan and I also was born on the Onion Lake Indian Reserve in 1907. We lived at Onion Lake for several years and my father looked after the I.D. (Indian Department) horses. 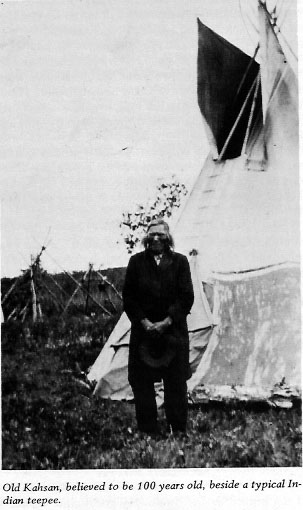 Afterwards we came to live on the Frog Lake Reserve, on the part of the reserve that is called Puskiakewenin. I went to the Anglican Day School where Alex Peterson was teacher. As a boy I learned to love horses, to trap, hunt and fish. One thing I liked was the excitement of chasing coyotes on horseback. I liked to chase them across Frog Lake when it was frozen in the winter. We sold the furs to Mahmud Rahall's Frog Lake General Store. He also bought fish from us. We sold fur to Rudolph Gregor too. He owned the Red and White store in Heinsburg.

When I was old enough I went out to work away from home. I found work at the Big Valley Ranch at Fort Pitt and worked there for four years. I also worked for three years for a man named Norman on his ranch at Mary Lake, Saskatchewan.

In 1930 I married Mary Napaheo, daughter of Gabriel Napaheo of Frog Lake, where we continued to live for many years. I did a lot of hunting and fishing but I made my main living by raising horses. I raised a lot of them and some were good race horses. I used to race them at the picnic that the white people held on "seven" which is near the south end of the reserve.

I used to drive in the chuck wagon races that were held in different places. Sometimes we (my family always went with me) travelled many miles to attend. We went as far as Meadow Lake. I was rider for the Frog Lake Cattle Association, on their lease north of the reserve, for two years. When my children grew up I divided my horses up between them. I can no longer drive the chuck wagon but my son-in-law, Borden Lewis, drives in the races at Meadow Lake as well as on other rodeos.

We left Frog Lake in 1964 and lived in Onion Lake until after my wife died on September 7th, 1967. I brought my children back to Frog Lake and we have lived here ever since. I now live in one of the new houses that have been built on the reserve.

I have a family of four boys and four girls. They are Lawrence Gabriel, Henry Lawrence, Mervin John and Gilbert Henry Joe. The girls are Agnes, who married Edward Soloway and lives at Elizabeth Colony; Helen and Eddy Stonechild live at Onion Lake; Julia married Borden Lewis, and Violet married Wesley Lewis. They live at Onion Lake.