Art Bowtell boasts that he could always see the lighter side of life, usually at his own expense and never at anyone's grief.

Art was born in Grey County, Ontario in 1887. His father, a farmer, came over from England in 1870. His mother was Scottish. The family moved to the Lacombe district in 1892 so that the father and two sons could homestead. One of Art's brothers was a land guide out of Lloydminster a year before the Barr Colonists arrived. Later he opened a real estate office in Vermilion in connection with his land guiding, and for a time Art worked with him. In 1904 Art became a railroad mail clerk running out of Winnipeg. He recalls that between times he learned to play pool, an art which later served him in good stead during his early days in Beaverlodge. 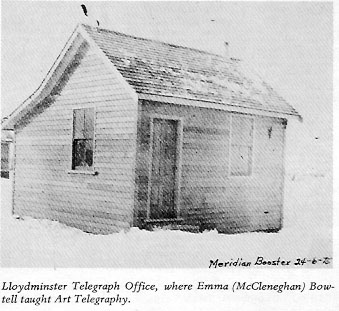 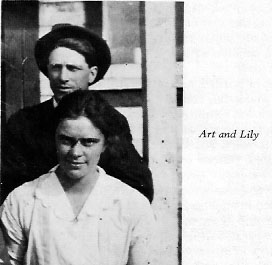 Art married Lily Roscoe of Kinistino, Saskatchewan, of English descent. He operated the telegraph at Mooswa, through Frog Lake to Onion Lake, the link with Drs. Miller and Ross of Elk Point. His office was exactly where the curling rink at the Lindbergh Salt Plant is now situated. They came to Mooswa when he and Lily were first married, after his sister-in-law, Mrs. Harry Bowtell, taught him telegraphy. Mr. McCartney was one of the first telegraph operators at Mooswa, then George Mann of Rex, Saskatchewan.

For 54 years Art was with the Federal Government Telegraph, under appointment by Frank Oliver. His first post was at Onion Lake, on an Indian Reserve, in 1907. He served at Lloydminster until 1912, then Fort Appelle, Battleford, Saddle Lake and Mooswa. He was at Fort Vermilion in 1931 and moved to Beaverlodge in 1936, on the death of John Murphy.

Living at Beaverlodge has been simple, the way Art tells it. His salary when he arrived was $480 per annum, but ultimately it was raised to $780. Part of his duties were to answer a telephone call by Violet Hayward of the Experimental Farm at 4: a.m., after Violet had stepped out in the cold to read the thermometers. Art in turn transmitted the message by telegraph to Toronto so that the world and those fighting World War II would know what kind of weather was brewing at Beaverlodge. Art's other task was to serve as mayor of the village of Beaverlodge for four years and to double as Public Works Officer.

There were two daughters; Muriel married Elmer Carter and they lived at Mission B.C. until Elmer died in 1971. Teresa married Al Davis of Vancouver and died about 1968. Lily died in 1937 and in 1946 Art married Hilda Anderson. Art may not move too freely now but he calls Beaverlodge home and can still see the lighter side of life.

We at Heinsburg have been saddened to hear that Art passed away a few days ago at the age of 87, January 1975.)