Daniel Gunderson was born in the Frog Lake district February 27, 1914, third son of Gerhard and Sigrid Gunderson - their first child to be born in Canada. His parents are Norwegian, and Dan couldn't speak English until he started school. When he was two years old an Indian woman, Mrs. Joe Kechino, tried to steal him. She grabbed him and ran, with Ma Gunderson in pursuit. Dan went to school in Norway Valley and Marwayne. He remembers going out plowing with a team of horses and a walking plow when very young. Those days the young ones had to work. Dan had a dog team for several years which provided the only youthful enjoyment he speaks of. He travelled many miles that way. He would go from his home in Norway Valley to Lea Park store in the evening for groceries and coal oil for the lamps. He took violin lessons from Gunder Brocke. Dan would ride horseback to North Park for those lessons, although it would be very cold in the winter. 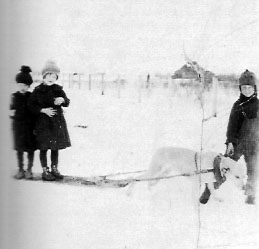 Dan with his one-dog outfit

The first time I saw Dan was a cold winter day. He drove his dog team into my parents' yard at Hazeldine looking for his sister Gudrun, who lived next door. Dan worked several years on the threshing outfits around Dewberry. There wasn't much work for the young men in those days; they were the depression days, the "hungry 30s." Dan and I were married in 1935 at Islay, Alberta. We first lived on Walter Gunderson's homestead at Frog Lake. This place bordered the Frog Lake Indian Reservation. At first I was very frightened of the Indians. Most of the time when they came they were hungry. The Fryingpan family were the ones we saw the most of. We had four children. Shirley, our daughter, was born at Marwayne, Alberta December 11, 1935. Sons Daniel Gerhard (Paddy) and Donald Charles (Duff) were born January 5, 1937 at William Saranchuk's home at Middle Creek, which was also the Primrose post office. It was mail time when I arrived there, and 40 degrees below zero that day. A group of men went and opened the road to Lindbergh. Some time later Dr. Miller arrived, but the twins had arrived a few hours ahead of him. Our last son was born at Frog Lake district February 2, 1938, with Grandma Kjenner as midwife. He only lived one day.

I remember Dan carrying 100 pounds of flour on his back from Barstad's place to our home, which was about three miles up and down hill. The flour was almost as heavy as Dan. Our first car was an old Model T. Then in later years we got a Model A, which I learned to drive, but it never had brakes. 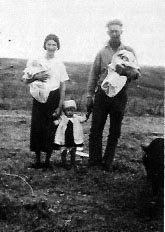 In the fall of 1938 we moved to Ferguson Flats for two years, and then moved to Norway Valley in 1940, to the Gunderson place for awhile, and finally bought the Helgerson place, where we lived until we left the district. Our children attended the Norway Valley School. Gus Brocke was the teacher.

While living in these districts Dan did all kinds of work to make a living. Work was very scarce, and no one could afford to hire help. He cut fence posts and would haul them for miles to sell them in severe cold weather. He had a wood sawing and chopping outfit for a couple of years, and that was a cold, dangerous job. He had a small sawmill for awhile, too. The last years in the district he had a threshing outfit and did custom work. He also hauled grain with a truck. One spring Dan was coming home from working south of the river at Heinsburg. It was dark and he had a team and cutter. He inquired about the river ice and was told they had been crossing on it all day. So he drove down there in the dark and went into the river. It was lucky he and his team weren't all drowned as there was only a little ice. He came home from Heinsburg to Norway Valley soaking wet.

Many a good time was had in the Norway Valley district, as people had to make their own fun. The school house was used for church and dances, etc. In winter we went from home to home for card games. During the war years the women of the district got together and formed a Homemakers' Club. We sent parcels overseas to the boys of the district and to any of our relatives overseas. We will always remember our district nurse, Miss Anna Nordtorp. What a help she was in time of sickness! We seemed to have our share, too.

One thing of great interest to the district was when we started the barbed wire phones. It wasn't long until they went for miles, as far east as Tulliby Lake, or farther. Dan got the idea one day; these phones should work through the radio, so he worked most of one night trying different things until he got it working. The next morning when Dan phoned his Uncle Oscar he wouldn't believe it until he came over and heard for himself. It didn't take long then for every one to hook their phones up this way, because we seldom listened to the radios any more. In the evenings Stan and Roland Brocke would sit in their home in North Park and play the violin and guitar, while we sat in our homes and listened and requested songs. If anyone in the district was sick everyone knew about it immediately. The story telling hour never started until midnight.

In 1946 we took our first trip out of the country. We went to Bellingham, Washington, U.S.A. to see. Dan's folks. It was 30 degrees below zero the morning we left, taking Doris Barstad with us. When we got to Idaho and saw apples on the trees we couldn't believe it. It rained all the time we were in Bellingham, then when we got back to Alberta we had severely cold weather for six weeks. We decided then we'd like a warmer climate, so in the fall of 1947 we sold out and moved to Surrey, B.C. Dan worked in the woods until 1953, when we moved to the interior of B.C. - the Cariboo district. Dan started another sawmill and worked at that until 1966, when he started ranching, his dream since a boy.