In 1910 Arno George Neuhausser left his home in Farmington, Connecticut, to homestead some land in Frog Lake, Alberta, Canada. There were ten children in the Neuhausser family, eight boys and two girls. We all worked hard and we were all musical.

Frank Anton Neuhausser, our father, was a very talented musician and had an orchestra with four of his sons, Reinhardt, Charles, Oscar and Arno George. I was very proud of all the music I heard as a small girl. I played the triangle at four years and kept waltz and polka time. It was beautiful; our father was very firm and led the orchestra. Our mother, nee Johann Wilheleminia Kunze, was a very firm and just disciplinarian. She passed away in 1908 and my sister Minnie and I took over the work. We had many fine ladies, in Farmington, Connecticut, to help my dear sister and I. They saw to it that we all went to Sunday school and church every Sunday. One week, on Sunday, my sister stayed home and cooked while I went to church. The next week I stayed home and cooked for the eleven people. I never gave up; I always worked hard. I'm thankful for my children which I raised as I was raised. I thank God for my wonderful, patient, just mother. She was wonderful and I think about her every day. We owe so much to such a dear, sweet mother.

In 1920 I came to Frog Lake to visit my brother Arno George. I went by train from Hartford, Connecticut. 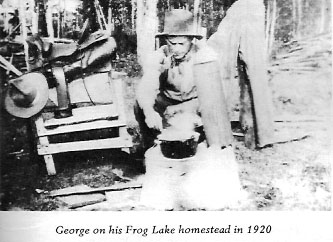 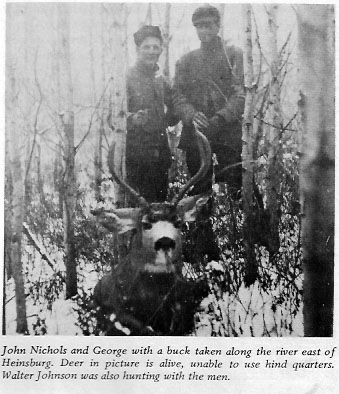 Arno George adopted the English translation of his name Neuhausser and was known to his neighbors as George Newhouse. He homesteaded here in 1910 on N.W. 36-55-4- W4th. He was a true pioneer, a man of the soil and a lover of the outdoors, a love that was shared by his sisters, Martha and Minnie when they came from the States to visit him.

He was an excellent trapper and sold much fur to the local buyers. Hunting and fishing were not only a necessity, it was his recreation, as was his music. His neighbors often recall the times they enjoyed his guitar and concertina music and the many songs he sang. He too, thought the railroad would be coming through in a short time and chafed at the bit while waiting some twenty-eight years for it, in the meantime hauling his grain to Kitscoty.

In December 1934 he married Opal Resler. Opal came to the Norway Valley district when quite a young lady and helped her folks establish their home near Alma Lake, after giving up their Youngstown farm to the drought. George and Opal had four children, Audrey, Hilda, Louise and