Rudolph (Roy) Meger was born in 1904 in Wladimir, Wolynia, Russia. He was the oldest of the four children born in Europe. In 1910 his father came to Canada, to be followed in 1912 by his mother and the family. They settled at Biggar, Saskatchewan, where for fourteen years Roy farmed and worked at well digging. In 1934 he married Martha (Meger) and the first four children were born in Saskatchewan. In 1947 the family rented Dmetro Hawryluk's farm at Primula, and a year later rented from Lena Gochko. 1952 found the family moving to Vernon, B.C., where Roy was employed at a sawmill, Martha at a creamery, Norma at the Okanagan Cafe, and Dorothy at the bus depot. 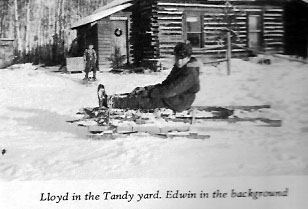 In 1953 they took up residence in the Tandy house at Frog Lake, and in the autumn of the next year rented Ole Lunden's farm, moving into the old house there. In fact, Martha went to the Elk Point hospital the morning after Ole's sale for the birth of Gary, their last child. The Oliver Brown farm was purchased in 1963, and the Gordon McMullen place was rented for a time. Three years later Martha signed on as cook with Evans Construction east of Lloydminster. She stayed with the company for three sea sons. In 1968 Roy joined her as "bull cook." The following year they both went to work for Wells Construction of Edmonton. 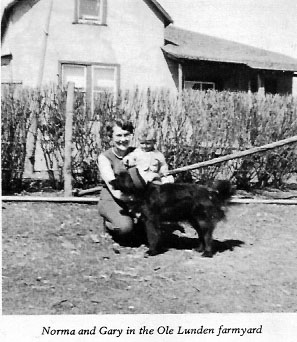 Gary attended Camrose Lutheran College, and worked part time with his parents at various locations in Alberta and Saskatchewan. Their farm sale was held in 1971. Martha was working for Poole Construction. In 1972 Roy farmed alone, while Martha cooked at Athabaska. That fall they purchased a home in Camrose, chosen because it was a reasonable distance from the children and their families. Since then, Roy has worked on the large Duggan farm, for Wilbur McBain on his farm southwest of Camrose, and for farmer Bob Hurlburt, southeast of the Rose City, who is also Texaco bulk agent. Martha enjoyed bowling the first winter. She went to work as cook at the Canadian Lutheran Bible Institute, and is still holding that position.

Norma's husband, Ed Drolet, operates a tire shop at Lamont. They have four children. Dorothy McMann lives in Fort Saskatchewan with three of her children. The two eldest work at Jasper. Lloyd, Margaret, and their two children lived in Hinton, but have sold their house there. Margaret is the daughter of C.F.R.N.'s Jack Benbow. She met Lloyd while teaching at the south school on the Frog Lake Reserve. Lloyd once cut pulpwood, but is now employed at a coal mine at Luscar. He has recently purchased a farm at Seba Beach, fifty miles west of Edmonton, and plans to ship bulk milk. In the past he has participated in Pony Chuck-wagon races. Edwin married Peggy Brycks of Lamont. He works for C.C.I.L. as a heavy duty mechanic, and Peggy is a certified nursing aide in a Calgary hospital. Gary has been with Cook Construction for some time as a buggy operator. He is still single. 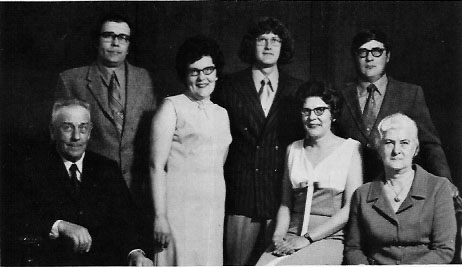 Back: Lloyd, Gary and Edwin