The Scheidels came from Europe in the early 1900's. Around 1913 they arrived in the Heinsburg district where they homesteaded on N.W. 34-55-4-4, a place that now belongs to the Bosviks. They were still in this area in 1920. After they sold out they went to Edmonton where they ran rooming houses, later moving to Vancouver, B.C. They never had any children, but were kind enough to adopt a school-aged boy named Jerry. Jerry married, but his wife passed away, leaving two daughters, and in 1961 Jerry also passed away. 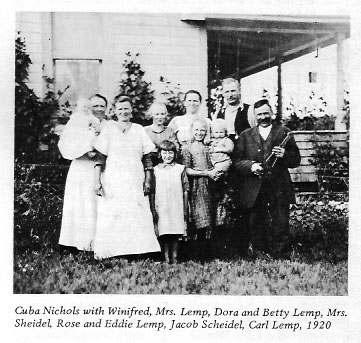 Mr. and Mrs. Jacob Scheidel returned to the old homestead, perhaps in the mid-1930's, where they tried once more to farm. During their stay Mrs. Scheidel had the misfortune to injure her hand. She tried to lead a balky horse from the barn but it refused to budge. She made a common mistake in wrapping the rope around her hand to gain more purchase. The horse pulled back and she lost a finger. They returned to Vancouver where Jacob passed away in 1957, followed by his wife on the day of his funeral. She had been in ill health for some time.