I first came to the Frog Lake - Heinsburg area in 1915 to visit my sister Julia, Mrs. Philcox, and spent the winter with them. I crossed the river at Heinsburg for the first time in the fall, the day after the ferry had stopped, in 'a row boat because the river was full of ice. Carl Schneringer crossed the river at the same time. There was no town at Heinsburgonly a post office approximately four miles north of the river. I stayed until February 1916, then went in search of work, and came back in the fall of 1916. During the winter of 1916 - 17 I built a house on the homestead from hand- hewed logs, which I took out of the bush. I worked out in the summer, then married Pearl Clish in 1918 and continued to farm until 1929. 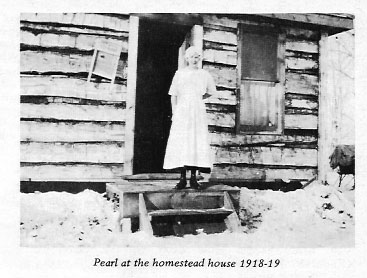 Times were tough during the years on the farm; there wasn't much money. In the year 1919-20 we experienced a hard winter and had lots of bad luck. That year we lost a lot of cattle, as the price of feed was high and we didn't have much money to buy it. We both worked hard, but we were happy and in good health. In 1921 and 1922 we had big gardens, which provided us with lots of vegetables for winter. We had lots of nice fresh spring water to use. During that time we sold butter at 1 cent a pound and eggs for 5 cents a dozen, and the storekeepers didn't really want them. We always managed to have lots to eat, never went hungry. I, Pearl, will always be thankful, because when the girls were born I had Mrs. Thora Kjenner (known as Grandma Kjenner) to stay with me. She was a very kind woman. We had some really good neighbors, and the Alex Peterson family seemed to be sort of special because we did a lot of picnicking together. We have remained friends throughout the years. , Isabel Peterson (Bristow at that time) was the first woman I met when I came to the homestead.

Pigs were hauled to Islay, Alberta - a distance of thirty- five miles by team, usually a two-day trip. During this time cattle were cheap; one time I sold seven head for $145., and one was a four-year-old. I remember one time coming back from threshing south of the river and not being able to cross the river because the ice had just stopped the ferry the day before. In order to get home I had to leave the horses with a farmer, then crawl across the ice on two poles, and walk home a distance of seven miles. In the spring of 1920 I was hauling saw logs on snow in May. I went out working to make some extra money doing carpenter work. I worked on the Elk Point Hospital in 1927. 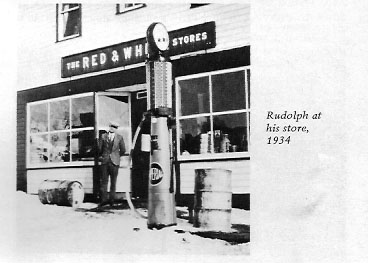 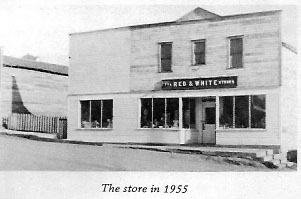 I started to build a store in Heinsburg in the late winter and early spring of 1929, using some scrap lumber left from the elevators, which I bought. On June 6, 1929 we left the homestead and moved to Heinsburg. It was a really hot day. Pearl, Alice and Janet walked and drove five head of cattle; we had to keep the cattle moving because the heel flies were bad. We were afraid they would take to the bush and would then get away. They reached Heinsburg before the wagon and, being very thirsty, went to the home of G.E. Evans to get some water. On the wagon was I (Rudolph), Pearl's mother, Jessie and George, and soon we were settled upstairs above the store. There we had to get down to everyday living. Pearl's mother stayed with us to help out that fall. We had boarders until the cafe opened in the hotel. Some of them were Joe Arnold, Jack McMullen, George McMullen, Bill McMullen, and Mr. Fuller at times. It was a very nice fall that year. Jack McMullen used to have dances in the loft of his big barn, and we all had good times. Some of the ones here then were Mr. and Mrs. Charlie Gibson, Gerald Lawrence, Brandts, Prills, the Evans family, Chartiers, and of course the McMullens. Pearl hated to leave the homestead because it was pretty in the spring (everything was nice and green), and she liked the horses and cattle - especially the horses. She also missed visiting Mr. and Mrs. John Fry. Mrs. Fry was a nice woman and very fond of Alice when she was small, - in fact really good to us all. 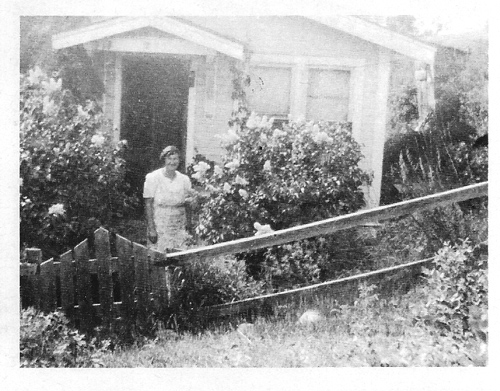 Pearl at her Heinsburg Home 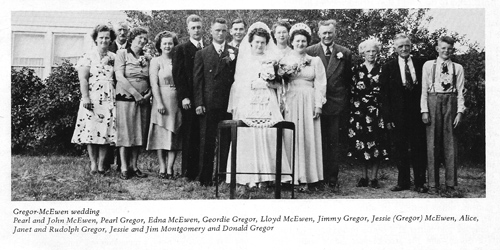 When we first moved to Heinsburg there was no school and the children had to attend Martin School, taken by covered wagon or even walking part of the time. The store, when opened, was 28' x 30' with living quarters upstairs. One side held groceries, and the other half was a lunch counter, serving meals to boarders, etc. and midnight lunches for dances. The lunch counter was eventually given up, and we concentrated on a general store business and fur trading. The store was known as the Red and White Store for a number of years, and it is still operated under the name of Lucky Dollar Foods.

We have six children. Janet, married to Jim Dolan, lives in Edmonton and has four sons. Jessie, married to Lloyd McEwen, still lives in Heinsburg and has five daughters and one son. Three daughters are married, so the McEwens have five grandsons. George married Pauline Maksymuik; they live in Edmonton and have three daughters. Jim married Alfreda Banuilus, lives in Sherwood Park, and has two sons and one daughter. Donald married Janet Armstrong and lives at Drayton Valley with three daughters. Alice is still at home, working in the store.