In 1896 in the province of Saxon, in Germany, a fifth child was born into what would eventually be a family of three girls and four boys. This child, Richard "Dick" Younghans, was, in the future, to leave his native land to make his home in Canada. During his school years he received musical training. Although he played the violin his favorite instrument was the cornet. It was with this instrument that he played in a band. After leaving school he went to work in the coal mines. His music was not forgotten but it could not provide enough income to live on. World War I began and Dick spent over two years in the German army. During that time he encountered poison gas. Out of the army in 1918 he found that times were hard. To add to people's misery the great flu' had struck many down while the doctors were still away at war.

I was born into a large family named Linke. We lived in the same province as Dick and when I was sixteen my mother died. At my work on a large farm our day began at six in the morning and continued for thirteen hours. We weeded and hoed the mangels and potatoes, tied grain in sheaves after cutting, and did all such tasks associated with farming. In the fall employees were given grain, feed for animals, and vegetables.

In March of 1919 Dick and I were married and set up housekeeping in the village where I grew up. Prices were high and food rationed. Rationing ended shortly before we left Germany. You were not allowed to own a rifle, even to hunt game, and there was no secutiry as far as the property you lived on. Then, too, if another war broke out, Dick would have to go. We felt we would have much more freedom in Canada.

Dick's step-brother was already in Canada, near Macklin, Saskatchewan. He sponsored us and sent money for our passage. Paul, Dick's brother, accompanied us, leaving his wife behind. Our oldest child, Milda, was almost four and Eric was two months old. At Hamburg we found a strike was in progress so we travelled by train to Rotterdam, Holland. From there it took us four hours to reach Liverpool, England. With the boat sitting low in the water, and two small children to care for, it was a memorable journey. The overnight stay at Liverpool was a worry, too. We feared for the children because of the rats. After nine and a half days aboard ship we docked at Halifax. Ahead of us yet was a train ride of several days length before we reached Macklin.

We bought a quarter of land at Provost and in time owned another half section. During our twelve years there our three boys, Frank, Bill, and Fritz were born in 1927, 1931 and 1933, respectively.

Paul Younghans was in the Martin district on the Higgins quarter. Joe Block had made a trip from our country to the Heinsburg area, and upon his return he reported "grass so high you couldn't see the cows!" We had been hailed out, and dried out, so the reports sounded good to our ears.

Dick took a quarter section across from the Frog Lake cemetery but let it go. He rented a quarter from Bristows, N.W. 13-56-4-W4, across from what is now the home place. We lived there two years. The quarter we are now on, N.E. 14, was purchased from Rudolph Gregor in the spring of 1939, and that fall we moved onto it. In the next two years we bought the Kline and Fry quarters, in that order.

During World War II Eric was working for Knut Rinde and did not have to go into the service. Later he attended the Regina Bible School for two years. Frank left school, farmed at home one year, then went out to work. Fritz was home the winter after finishing Grade IX, then worked for Ross Sanders for two years. During this time Eric took over. When Fritz returned to the home place Eric went out to work. Bill finished his Grade IX and later, through Albert Marshall, he learned of a job available in Saskatchewan. He went to work for Les "Pop" Johnson, one of the brothers who formed the Johnson Farming Company at Eston. He is still there but the original company was divided and he now works with Dosh Johnson. He married Annie Risch in 1958. They have six children, including a set of twins. 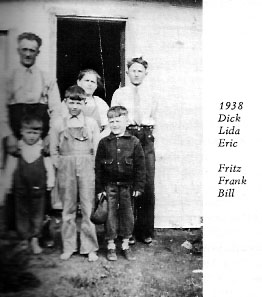 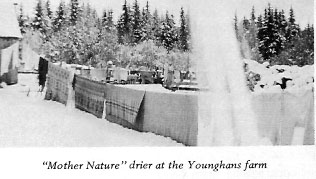 It was fortunate that our family included boys of an age and inclination to farm, because, by the late 1940's Dick's asthma was severe enough that he could do no field work. Coal dust, poison gas, pollen and dust on the farm had taken their toll. He passed away in 1951, late in his fifty-fourth year.

Eric married Donna Troutwine in 1962. They have a boy and a girl. He was formerly employed with Eliason's Limited of Wetaskiwin as a foreman. He is now superintendent of roads with another company at Fort McMurray.

Milda had quit school in Grade VIII. Her Uncle Paul knew she was a good cook so he got her a job at Felix Berlinguette's in the St. Paul area. Two years later she married their son, Vic. They were in the hotel at Vilna, and on a farm at Therien. Vic then went to work on the oil rigs at Drayton Valley, where they live today. They had eight children.

Lorne, their fourth child, lived with Fritz for six years. In 1966, at age nineteen, he was killed in an accident on the road near the site of the original Heinsburg store and post office. He was operating a tractor which was pulling a truck. When the truck began to close in on the tractor he swung the tractor to the side to let the truck go past. When the tow chain caught the tractor wheel the machine overturned, pinning Lorne underneath. It was believed that his knee against his throat caused death by asphyxiation. He was buried in the Frog Lake cemetery.

Frank married Edna Ford of Marwayne. They live, with their four children at Marwayne. He is caretaker at the Winston Churchill School in Lloydminster.

Fritz married Doreen Kjenner in 1959. Sons Darrell and Darcy both play hockey and for some time Fritz has been coaching. Todd was born in 1973. He is already showing a keen interest in hockey, too. Fritz is still on the farm. He farms or pastures the Upchurch and Gunderson quarters, purchased from Nick Bakala, the Jones quarter north of the old school site, the Madvid quarter east of it, and the Gardner place.

I have a small house in the farmyard. I attend the Full Gospel Church at Greenlawn whenever possible, and belong to the missionary group. I still correspond with a number of ministers who were formerly in our area. I have never had any desire to return to Germany, no matter what circumstances faced my family or me.