Elzie and Jessie Dow came from Menomonie, Wisconsin, in the year 1912, to a sod shack on a homestead not far from the Chauvin Bridge; George Silk has the land now. From that shack they moved to C.P.R. land in the Oxville district where they farmed until 1931, then they lost that land and Herman Eggen bought it. They then moved to a farm in the Acomb district, north of the Saskatchewan River. From there they moved to the big white house close to the Frog Lake store. They lived there awhile, then moved to Vermilion, Alberta, where they lived until they passed away, Elzie in 1948 and Jessie in 1957.

Of their marriage there were seven children: Earle still lives in McLaughlin, Alberta, not far from where he was raised. Elma (Tuey) lives in Edmonton; Jay in Lloydminster, Alberta; Bina in Yellowknife, N.W.T.; Lorne in Edmonton; Roy in Toronto, Ontario. I married Jules Parenteau of Norway Valley and live in Drayton Valley, Alberta. 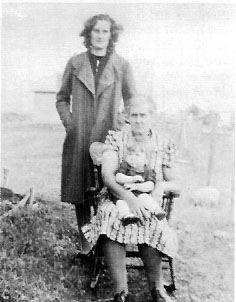