Bernt Fuglestveit, born in Norway on February 28, 1889, left his homeland in 1906 to come to North Dakota, U.S.A., where he resided for some time. Eventually he came to Jenner, Alberta, where he homesteaded for fourteen or fifteen years, most of which were dry. Consequently, in 1938 he came to Heinsburg to work for Knut Rinde for a year. Later he bought a quarter of land, S.E. 25-55-4-W4, where he built a small house.

In 1944 or 1945 Gus and Ole Johanson sold their land to Bernt, and he carried on with mixed farming. For several years he worked as a buyer for North Eastern Alberta Livestock in Heinsburg. Prior to his death in December 1954 he had returned to Norway at least three times to visit his family. 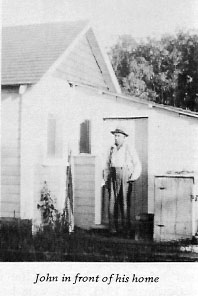 John, Bernt's older brother, was born in Norway on August 5, 1876. After studying in Danish and Norwegian agricultural institutes he obtained a teaching position at an agricultural school. In 1906 he made up his mind to come to America.

Back about 1450 a man named Glambeck came to Norway from Denmark. He took over a farm which bore the name Fuglestveit, so that was the name he and his descendants used in Norway. John had been baptized John Glambeck Fuglestveit, so, upon leaving Norway, he took Glambeck as his surname, thinking it was easier for people in America to pronounce and write. Although Bernt was referred to as Ben Glambeck, he had retained the Fuglestveit name. My family has used Glambeck since coming to Alberta.

John resided in New York for some time, then moved to North Dakota, and from there to Jenner, Alberta, where he farmed close to his brother Bernt. One time a cyclone stormed through his farm, rolling his house three times. Just before the building rose into the air John jumped out of a window. Landing beside a hay mower, he clung to it until the cyclone subsided. The house was totally demolished. Some of his household effects were found as far as a mile away.

Joe, a third brother, came from Norway a year or two after Bernt and John, and farmed with them at Jenner. He then went to the Dawson Creek area, fifteen or twenty miles from the town; his post office was Arras, B.C. He spent a number of winters here with us. 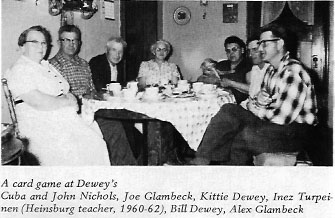 I was born June 20, 1925, and my wife, Gunlaug (Kaasa) on July 6, 1927, both in Norway. Our only daughter, Inger Kristine (July 10, 1949) and Bernt Olaf (September 13, 1953) were born in Norway. In 1955 we came to Alberta to take over my uncle Bernt's farm. Arne Gunner, our youngest, was born November 18, 1960. He is still at home, taking his education at Heinsburg. Both Kristine and Bernt (Ben) received their education at Heinsburg, Camrose Lutheran College, and the University of Alberta where they both became qualified teachers. Kristine taught school at Elk Point and Heinsburg before returning to Norway, where she married Per Bratland. They are making their home in Norway, and as of January, 1976 are proud parents of a baby daughter. Ben married Judith Ruskowsky of Wetaskiwin. They live in Girouxville, Alberta, where both are teaching. They are using the name Fuglestveit. 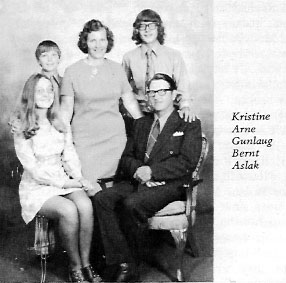