THE GIBSONS - by Ileen Cox

I know very little about my grandparents, Charlie and Daisy Gibson. They had a homestead at Youngstown, Alberta where Charlie worked in the Sheerness coal mine. They came to the Frog Lake area in the early twenties where they farmed on N.W. 31-56-3-W4th for a short time. Charlie also worked in Mahmud Rahall's store in Heinsburg before it was sold to Benny Kates. He also helped on the Heinsburg ferry for a season.

They moved to Idaho, U.S.A. in 1929 where Charlie had a bout with pneumonia, and being threatened with tuberculosis, returned to the dry, clear air of Heinsburg. During this time I believe they worked in the Riverview Hotel with Mrs. Peterson, later Mrs. Brandt. They returned to the States, this time to Seattle, and both passed away in the thirties. 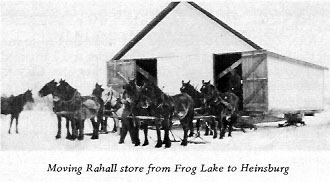