as told by Alice (Dumont) Daniels

The first I remember of my father, Bill Dumont, was that he came from Calgary before he married my mother, Mary Deschamps, My father was a descendent of Gabriel Dumont that you read about in the history of the Riel Rebellion. My mother and father were married in St. Paul, Alberta, which was a French-Metis settlement at the time. My dad worked for the surveyors when he was first married. He was away a lot as his work took him away from home. He was only home with us once in a while. They then moved to Saskatchewan where he worked as ferryman at the meridian crossing. This was about the year 1905. The oldest child was a girl who died at the age of eighteen months. Sam was born in 1908; Julia in 1910; Alice 1912; John 1914; Maggie 1917. 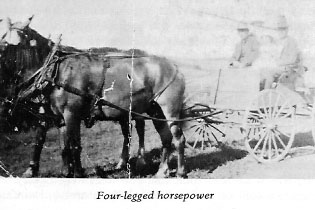 In about 1921 we sold the place and moved to Fishing Lake for one winter. We moved our stock, horses and cattle. I can remember so many of our stock dying off that winter. I remember my dad saying they were not used to the grass or hay. We had prairie wool when we lived down by the river and this is what they were used to. However we stayed there for one year, then we moved to the place that was called the Chapelle place. This would be about three miles southeast of the Frog Lake store today; about a mile east of Jim Boyd. Here Louis was born in 1923; Harry 1925. We lived there until 1926 when my father died. We then moved 1/2 mile north on the homestead, where my mother lived until her passing on June 9, 1963. During the war brother Louis went overseas.