My father, Wasyl Makohin, was born at the small town of Denysow in the Ukraine. He came to Canada in 1909 and settled in Wostock, Alberta. That is where I was born. I don't know if I can do Daddy justice in the story of his short life. He was "a going concern", but this had its drawbacks as he was so busy helping others and taking part in community activities that much of the load of work on the home farm was left to Mamma and us kids.

He moved east about a year after he came to Wostock, and took a homestead on 36-55-5-W4, then urged his friends from the old country to come and settle there. He made friends with Mr. Cowley and Dan McKenzie, and they taught him some English. In 1912 a post office was established in our home and Daddy became postmaster. It was named Primula; there were lots of wild primulas growing there. From then on he spent much time for the community, such as secretary-treasurer for our school district. He built a house with a long centre room which included a stage. The community had a good drama club and in this room concerts and plays were held â also dances until a community hall was built. On one side of the room was a kitchen and the room on the other side was the post office. Daddy was president of the Taras Shevchenko Community League and I remember that many a night he kept the oil lamp burning as he copied parts for plays. My parents were Greek Catholic and we had a priest come from Mundare to celebrate Mass at Easter time. People of Catholic belief came for Holy Communion. Daddy read the Psalter at funerals. He also made coffins. Beside the things I have mentioned he was councillor for the Municipal District of Ethelwyn. 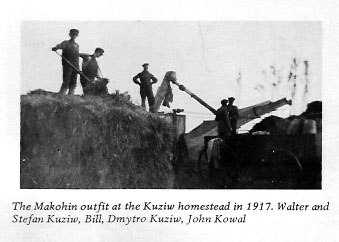 He bought a threshing machine and did custom threshing. Sometimes this went on until the end of January. He had a blacksmith shop and people came over to have different things made or repaired such as wagon rims, plow shares, etc. He did have a wee store for awhile, but many customers charged goods 'til they had some grain, cattle or pigs to sell. That venture didn't last very long as Daddy had to pay cash for the goods he got to sell. In 1923 he bought a new threshing machine and tractor. Mother died that winter after the doctor delivered a dead child. She was so very young â only thirty-four years. Daddy was only forty-four years old when he passed away on October 17, 1924, as the result of an accident with the threshing machine while working at Gus Clack's farm. Daddy had never served in the army because he had smallpox as a child and somehow he had crooked arms. He could not straighten his arm at the elbow, which perhaps was the cause of the accident.

The estate was difficult to settle. Daddy had co-signed for several of his friends at auction sales (sales were on time terms) so two or three of these bills had to be paid out of the estate. I think that money should rightfully have been for us orphans â but that is the law. There were four of us left. I was fifteen, Walter ten, Stefenia five, and Paul was two. Stefenia and Paul were adopted by the Belter family of Bashaw, Alberta. Wally was with the Lundgrens of Armistice, Alberta and adopted their name. He remained with them until he was twenty-four. I went out to work. Now we are Anna Dzuranuk, Edmonton; Walter Lundgren, Calgary; Stefenia (Stella) Clause, Vancouver, B.C., and Paul Belter of Camrose, Alberta. 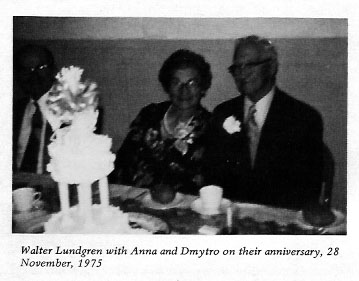 My heart still aches for you,

for you were so young,

God had other plans,

And took you for his own.

The image of your face,

faded away from my mind,

you were so good and kind.

You taught me to pray,

to trust in God above,

Try to live by the golden rule,

I did not wear a rose today,

as in former years.

Instead I wrote a poem.

and sprinkled it with tears.

Sometimes in near future,

we shall meet again,

And live with our father,