My husband, Ross Driver, was a fur buyer for Carruthers Hide and Fur Co. of Winnipeg and Edmonton when we met Mr. Rahall in St. Paul, Alberta in 1921. Mr. Rahall was needing a manager for his General Store at Frog Lake. We decided to take the position, so my husband and our two small children, Wesley Ross, three years old, Ruth Anne, one year, and myself moved to Frog Lake during the summer of 1921. Not having a residence to move into we were privileged to make a temporary home in the upstairs part of Harry Bowtell's big granary on the hill, while a house was being built for us adjacent to the store. 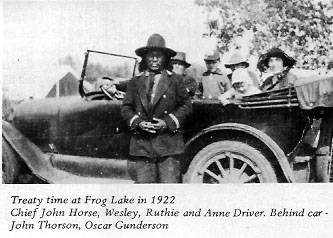 The kindness of our first wonderful neighbors, the Bowtells, still warms my heart. They soon helped us to get over the loneliness of being away from all of our old friends and neighbors. I remember, too, how much we appreciated the visits of the R.C.M.P. officers who stopped in occasionally for a chat and game of whist.

We had a very interesting experience that summer when we spent Treaty Day at the Frog Lake Indian Reserve where we met Chief John Horse and had our pictures taken with him by my husband.

It was late that fall when we moved into the house by the store. It wasn't completely finished so there were times when the wind and snow blew in around the eaves; there was ice on our water pails some mornings, and I was sometimes fearful for the children's noses. However, the days were happy and interesting, as the fur business was especially good with the friendly Indian trappers from the nearby reserve. They came to trade their lovely furs for groceries, traps etc. also the yards of pretty velveteen of all colors which we kept on the store shelves. My little son and his dad were soon able to carry on a fair conversation with them in the Cree language.

Oscar Gunderson was a good neighbor; we looked forward to him calling for us with his team and bob-sled to take us to the Norway Valley School dances. I remember him putting straw and blankets in the sleigh box so that my children and I would keep warm on those frosty nights. The blankets were handy for making beds for the children on top of the school desks, which were shoved to one side to make room for dancing. Sometimes my husband and I danced with Ruthie in our arms, looking so sweet with her golden curls and dressed in a pretty pale blue velveteen dress from the store shelf.

The summer of 1922 my husband's fur company transferred him to the Winnipeg office so we moved to Manitoba. Then, in 1923, the fur market folded. Work became scarce so we moved to the United States in 1924 and lived there until my husband's death in 1965. The following year I returned to Alberta and am making my home in Elk Point where I first met my husband when he was buying furs in this vicinity in 1916.

My daughter and family are living in Indianapolis, Indiana, U.S.A. and my son's home is in Alameda, California, U.S.A. They each have four children.