by Obert I. Gunderson.

Gerhard Gunderson, (1882-1958), son of Iver and Gerina Gunderson who came from Norway, was a native of Lac qui Park, Minnesota. On November 8, 1905 at Kvitseseid Luthern Church in Milan, Minnesota, he married Sigrid Lunden (1884) who had come from Telemark, Norway two years previously at nineteen years of age. Gerhard was a carpenter and a farmer. The four oldest children were born in Minnesota. Obert was born in 1906, Gudrun in 1907, Selma in 1909, and Walter in 1910.

Gerhard's brothers, Julius and Oscar, who had homesteads south of Vermilion, Alberta, persuaded Gerhard to move to Canada, too. A homestead could be purchased for $10.00 at that time. The family left Minnesota in the fall of 1911 and shipped a carload of farm machinery, livestock and household goods to Vermilion. They rented a place just south of town for the winter. Gerhard obtained work as a carpenter at the agricultural college and became friends with a Mr. Bishopp, who had taken up a homestead at Frog Lake, and who influenced Gerhard to do the same. 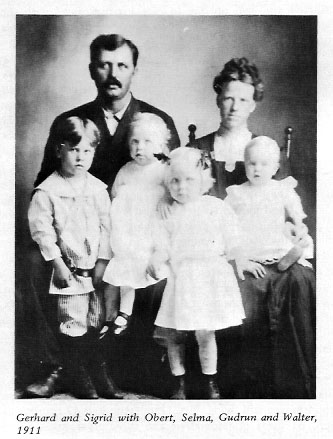 In the early summer of 1912 the Gunderson family headed north from Vermilion to Frog Lake, a distance of 50 miles, where Gerhard had filed on a homestead. Obert, age six, drove a team, wagon and hayrack loaded with household items, furniture, a calf and chickens. Gudrun, who was only five years old, ran behind, chasing four straying cattle. She recalls what a struggle it was to keep those four balky cows moving in the right direction. She also worried about her small brother Obert up on that high load and about her being left behind. Her mother drove the democrat pulled by an ox and a horse. The two smallest children, Selma and Walter, were with her. Gerhard went ahead with a team of oxen that pulled a wagon load of machinery, including a plow, binder, disc and snow sleds. They got as far as Dewberry, which was then only a store and post office, when it started to rain. The only place they could get to stay was in Fred Blair's barn, where they remained several days until the rain stopped. They travelled from Dewberry to Lea Park, where they crossed the river on the ferry, then travelled north to Frog Lake and to the homestead which was heavily treed. Gudrun remembers seeing her mother sitting on a log crying, after arriving in Frog Lake, and her father trying to console her.

They shared the home of a bachelor, Oliver Brown, while Gerhard built a log house on the homestead a half mile away. The roof was covered with tar paper, slabs of lumber, and the house had glass windows. Daniel and Leah were born in the log home; Daniel in 1914 with Mrs. Vollan from Lea Park as mid-wife (there were no doctors), and Mrs. Kjenner was mid-wife at Leah's birth in 1916. Mrs. Kjenner brought soup with her.

While at the homestead, Walter, who was four years old, one afternoon disappeared. There were some very anxious hours. Sigrid and the older children hunted, cried and prayed. He turned up in Jack Litchfield's field. Jack saw a little white head bobbing in his grain field, picked him up and brought him home. Obert can remember his dad making shoe packs out of cowhide for their footwear. Gerhard was very handy. One Christmas they had no money so he made toys, such as a wagon, sleigh and doll beds for the children. It was a very happy Christmas!

Gerhard managed to clear and break up about seven acres to raise feed for the stock. He seeded it by broadcasting the seed by hand and harrowed to cover it. They got their mail at Heinsburg, which was then only Heins' store and a post office. One day Gerhard hitched a horse and ox to the democrat for Sigrid and the children to go to the store for groceries and mail. Everything went fine until they got as far as the little log church. The ox just stopped and laid down right on the road! He would not get up so Obert got a stick to try and get him mobile. After much persuasion, he finally got up and they got their mail and groceries.

The Frog Lake school was built two years after their arrival. Obert was then eight, Gudrun seven, and the next year Selma started school. They walked the distance of two and a half miles. The hill on the north side of the homestead is still called the Gunderson Hill. 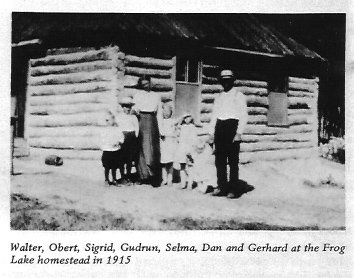 In 1916 they left the homestead and moved south to the Barker place (now owned by Arnold Barstad) in the district now known as Norway Valley. They lived there several years and then Gerhard bought a quarter section of C.P.R. land joining the Barker place on the east. He built the big log house on it where they lived for many years. Norway Valley had no school so they attended the Martin School, which was a three and one half mile walk or drive with horse and buggy. Gudrun and Selma remember the times they walked and how they had to sometimes drag their unwilling eight-year old brother Walter along that long road! Mrs. Holmes was the teacher.

Oscar Gunderson, an uncle, lived north of them along the lake. He was a bachelor when the Norway Valley School District was formed. They used his house for a school while the school was being built by Knut Rinde and Gerhard. Gunder Brocke taught at the house and Rachel Haugen was the first teacher in the new school, followed by Alex Peterson and Harold Ronning.

Gudrun and Obert each had a team of "old plugs" hitched to a walking plow. Gudrun remembers that, once out of sight, they would sometimes lie down in the furrows to cool off as long as they dared! She still remembers the trouncing they received after their father discovered they had been burrowing out gophers instead of working! The four older children recall looking for their milk cows on the open range, sometimes after dark. Once when the family was short of money, their dog came home with a muskrat in his mouth. Sigrid, who trusted God for all their needs, cried, "Praise the Lord!" Obert immediately skinned the muskrat, sold it at the Frog Lake store and bought the needed groceries.

During the hard winter of 1919 they were short of feed for their cattle. Gerhard and Obert, who was then thirteen, moved the cattle north about thirty miles to Duck Lake to Pete Peterson's sawmill which was shut down for the spring. They stayed there a couple of weeks in the camp. A snowplow was improvised so the snow could be removed for the cattle to graze. Gerhard had to go home and bring the wagon back, intending to return the next day. However, four days passed before he got back, during which time a very lonely, frightened, crying thirteen-year old found his only consolation in reading the Bible and praying. They went home slowly, allowing the weak cattle to eat along the way. They slept overnight on the floor of Chief John Horse's house on the Frog Lake Indian Reserve. The Bannock which they bought was very appetizing.

The four youngest children were born while the family lived in Norway Valley; Ruth in 1918, Grace in 1922, Anne in 1925 and Hilda in 1927. All but three were born at home without a doctor. (A sister Anna died when two weeks old in Minnesota and a brother, Haldor, born in Norway Valley, died when he was about one year old. He was buried in the Frog Lake Cemetery). The Gunderson home was a place where travellers and neighbors were always welcome. An elderly neighbor, Andrew Johnson, who was sick and crippled and had no one to care for him, lived with the family for eight years. Under Sigrid's care he was later able to get around on crutches until his death.

In approximately 1928 the family moved to Marwayne where Gerhard farmed and broke a hundred acres of raw land. He later operated a Cockshutt agency there. He built a two-storey house in Marwayne that later served as Marwayne Hospital. When the depression came in 1931 they moved back to their former home in Norway Valley where they lived for two years before having an auction of most of their household items. 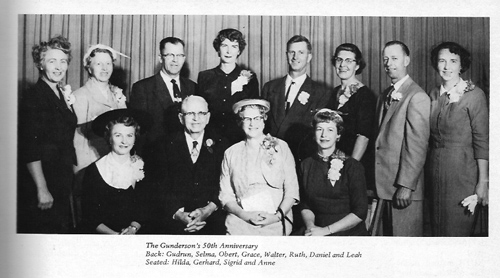 Gerhard attended Mr. Aberhart's Bible School in Calgary so they lived there for the year of 1933. Then they sold out and moved to Bellingham, Washington where they lived for a number of years. Gerhard and Sigrid celebrated their 50th Wedding Anniversary in 1955, surrounded by almost 100 grandchildren and great grandchildren, as well as their own ten children and many friends.

Gerhard and Sigrid moved to Mt. Vernon, Washington. Gerhard passed away in 1958 at the age of seventy-six, after suffering for several years with a bad heart. Sigrid is still living in Mt. Vernon and is enjoying reasonably good health at age ninety-one. In looking back, Mrs. Gunderson says that the years spent in the north country were hard years but yet they felt God's leading and care. They were a big family but there was always room for one more. All ten children are still living. Mrs. Gunderson had 47 grandchildren, 61 great grandchildren and three great, great grandchildren. She thanks God many times each day for His goodness to her and her family.

All ten children married and have families:

OBERT, the only one still living in Alberta, married Violet Isert of Dewberry and they have three children. Obert is the branch manager of a Real Estate firm in Edmonton. GUDRUN married William Isert of Dewberry and they had three children. Bill and the youngest child both passed away. Gudrun moved to Bellingham, married Walter Trapeur, and had two children. She has a tree and shrub farm north of Bellingham.

SELMA married Elling Westby of Bellingham. She has four children, is widowed and lives in Bellingham.

WALTER married Beverly Johnson of Bellingham. They had ten children, two of whom passed away. Walter owns and operates Gundie's Auto and Truck Wrecking in Bellingham.

DANIEL married Louise Maltais of Dewberry and had three children, including twins. Dan owns and operates a ranch at Horsefly, B.C.

LEAH married Louis Hawkinson of Bellingham. They have five children and live on Camano Island, Washington. Louis is retired from his position as Comptroller for Hughes Air West.

RUTH married Aadne Bakke of Bellingham. They have five children, including twins, and own and operate a hotel and restaurant in La Conner, Washington.

GRACE married Vern Winbolt and they live in Burlington, Washington. They have two children. Grace works at Safeway and Vern with a boat building firm.

ANNE married Chapin Dykers. They own and operate a dairy farm near Mt. Vernon. Chapin also does custom farm work. They have seven children.

HILDA married John Tamman and they live in Burlington, Washington. They have a septic tank business. They have three children.