STORY OF DMYTRO AND MARY KUZIW

as recalled by their son, Walter Kuziw

It was on April 14th that Dmytro Kuziw with his wife Mary and their family of six, Stefan, Anna, Anastasia, Walter, Tillie and Theodor (Dan), left the village of Deny- sow in the Ukraine to come to Canada.

The journey started by rail to Rotterdam, but due to the fact that the ship was unable to take all the immigrants they were transferred to Antwerp where they eventually were taken aboard and on to Canada.

It was thirty-two days after their departure from their homeland that they arrived at Islay, Alberta. With very few belongings, consisting of a few hand tools and clothes, and $215.00, they were still thirty-five miles away from the Primula district where they filed for their homestead, N.E. 32-55-4-W4.

With just $215.00 to spend only essential things were bought, first a cow, stove and ten panes of window glass for the house. On June 15, 1914, after filing for the homestead, the house was built. It was a log building with a thatched roof made out of the wild hay which grew in abundance. That summer was spent clearing some land and making furniture for the home. There was no saw mill close-by so we sawed the planks ourselves with a five foot cross-cut saw. It took all day to cut one plank about 1 1/2" thick. It was then planed by hand and made into furniture. Wooden pegs were used instead of nails, but they served the purpose. In fact the original dining room table is still usable to-day. 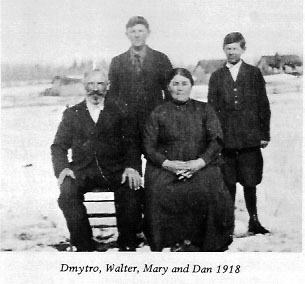 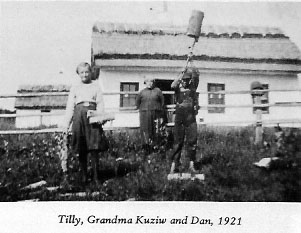 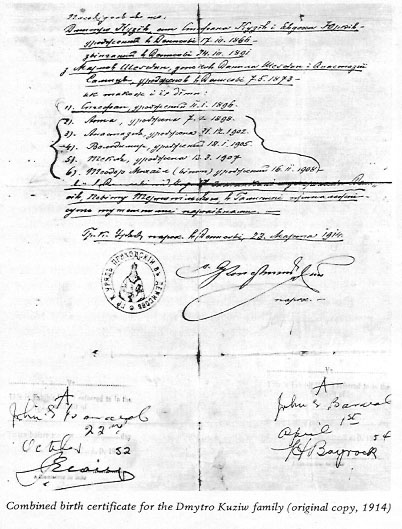 There was a trying and anxious time that first fall in Canada when "Bossy", our one and only milk cow, strayed away. This left the family without butter, milk, or cottage cheese. It was about two months later that Dad heard that there was a stray cow at Mr. Sampel's at Landonville. When Dad walked over there to see if it was our cow, sure enough it was, but to redeem the cow Mr. Sampel said he wanted $5.00 for the keep and breeding fee. Dad didn't have the money to pay, but being that a threshing machine was there to start threshing the sheaves that were in stooks, Dad said that he would be willing to work out the debt. When the threshing was finished Mr. Sampel gave Dad the cow plus $1.50 a day in wages, which for four days amounted to $6.00. When he got home with the cow and the hard cash it was sure a great relief to Mother and family.

Another time that stands out in my mind was the spring of 1915 when Father and I were taking ten sacks of wheat to the grist mill in Vermilion, which was forty-five miles away. We left about 5 p.m. with food enough for a two and one half-day journey. About one-half mile south of home, while crossing a creek, the wagon got bogged down. By the time that the wheat, grub and the oxen feed was unloaded, the wagon pulled out and reloaded, it was already noon. "Well," Dad said, "Let us go home and have dinner then we will hook up the oxen and continue the trip to Vermilion."

That same trip was also the time that we bought our own 14" wooden beam plow. This was the first piece of machinery that wasn't for hand use. The other tools were a homemade flail to thresh with, a scythe, sickles, spade, hoe and rake. By 1917 our neighbor, Bill Makohin, bought the first thresher in this area and did the threshing for us that fall.

In 1919 Dad bought SW 1/4 32-55-4-4th from Andrew Chuchmach, which became our present home place. In 1931 I got married to Lena Kowal on April 14th. The hard times were on and money became very scarce. I remember that we wrote a letter to our sister and didn't have three cents to post the letter.

In 1933 our first child Lila was born, and in order to buy her some diapers and clothes I had to sell my violin. In 1936 our second child, Steve, came along; about that time things were getting a little better. By 1939 when our third child, Roy, was born the price of grain had gone up to where farming was profitable. When I took over in 1934, we thought that we would not make it on the farm but the World War changed things and we stayed on.

It was the fall of 1949 that our daughter Lila was married to George Gavinchuk, who then was the C.N.R. agent at Heinsburg. 1960 was the year our youngest son Roy got married to Delores Cummine. He had left the farm in 1957 and went to work, and later got into the tire business in St. Paul. 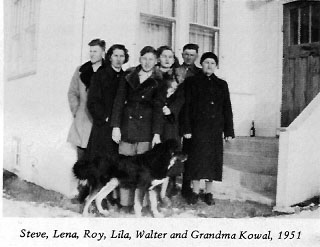 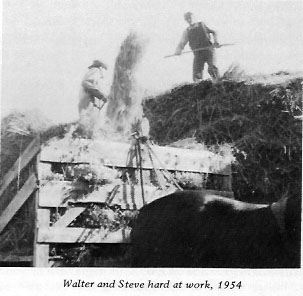 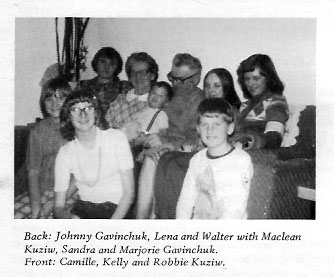 I retired from active farming in 1966 and our son Steve took over. We are at present still living with him on the farm, since he is still a bachelor. This is a brief biography of my life to the present day. I was born on January 18th, 1905 in the village of Denysow, the Province of Tarnopil in Western Ukraine, Europe. Daughter Lila has two girls and one boy, Sandra, Marjorie and Johnny. Roy still lives at St. Paul, Alberta and has two girls and two boys (Kelly, Camille, Robbie and Maclean).