Our father, John Thorson, was born November 8, 1855, in Tordal, Telemark, Norway. In the year of 1903, at the age of eighteen, he decided to come to North America to join his older brother Alf, who had come here previously. He stayed with his brother in Iowa for some time, and then went to North Dakota where he took out a homestead somewhere close to Minot. In 1910 he married Kari Kleven (our mother), who had also come from Norway a couple of years previously. In the year of 1912 he couldn't resist any longer from going to Canada; the country he had heard so much about. With his brother Thor and his father-in-law, Vraal Kleven, he left for Canada, coming to Kitscoty, Alberta, and then on their way to look for land. They bypassed miles of the best farm land while looking for country that reminded them of their homeland, Norway. At last they found it, and homesteaded in Norway Valley. It was along the North Saskatchewan River; hilly land, with a creek and streams, like you find in Norway. He proceeded to build their home, a log house with four rooms, I believe.

As soon as the home was finished enough to be liveable, he sent for his wife and two girls, Thelma, and six week old Dagny. Mrs. Thorson, the two children, her mother and sister Vena (now Mrs. Oscar Gunderson) came by train, in an immigration car, to Kitscoty where Grandpa Kleven met them with a team and wagon; so on they travelled to their new home. They camped that night by what is now the Reg Box farm, which at that time belonged to Albert Christ.

In 1915 John again got the roaming fever. They sold the home they had built to Ed Tullson, it was moved to the Ttillson farm across the river, and off they went to the States again. By this time there was one more mouth to feed, another daughter, Tilda. They went first to Minot, North Dakota, and then to Berlington where they built another home; John was a carpenter at heart, although you might say "jack of all trades." 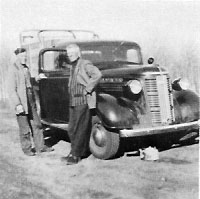 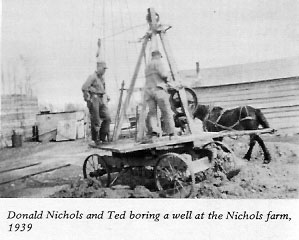 He worked in the mines at Berlington, but they couldn't forget Alberta, mainly Norway Valley and the homestead there, so back they came in the year of 1917. He then bought an adjoining quarter to his former homestead, which by then was owned by Theodore Anderson. He built another home on this land and later managed to get some more adjoining land.

In the early years John used to go to Cold Lake and fish; selling them to help make a living. Our mother, Kari, would stay home and do the chores, which was a real hardship in those days, with cold winters and no conveniences such as we have in these days. By then they had their fourth daughter, Violet, and had given up hopes for a son. The grain was hauled to Kitscoty for many years; it took two or three days to make the trip, it being over thirty miles. They made one of their stop-over spots Frank Burns' place at Marwayne, which is where Dan Ure now lives. In later years things were looking up and they bought a half ton truck and did custom work, hauling cream to Elk Point. The Thorson home was always open to all newcomers that came to the community looking for land; it was also open to ministers, as John and Kari were always ardent church workers. 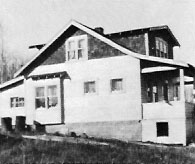 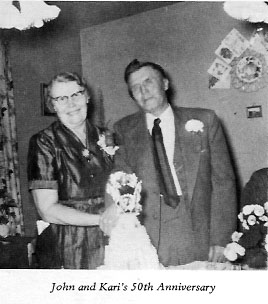 John's youngest brother, Ted, came from Norway in 1925. He was a good skier, and was very interested in that sport. He helped organize and build a ski jump, on a high hill, just above Thorson's home. It was the center of Sunday winter attractions. People came for miles to attend, and Mrs. Thorson always had the coffee pot on and served lunch to a full house most every Sunday. John finally gave up farming in the year 1944, selling his farm to his son-in- law, William Kinshella (Tilda's husband), and moved to Edmonton. They soon sold their home in the city, and moved to Marwayne where they resided until his passing in 1961. Mrs. Thorson is at present time living in the Lutheran Home in Wetaskiwin where her daughter Dagny (Mrs. Herman Wilson) lives. The farm John owned in Norway Valley is now owned by Bob Quist from Marwayne.