Russell and I were married in the home of Russell's parents, Mr. and Mrs. George Dewey, in the Martin district. We bought the house that Phil and Bess Sillem had lived in, moved it onto N.E. - 36-55-4-W4th, across the road from the Old Martin school house, which the residents of the Martin district had purchased from the County of St. Paul and renamed the Martin District Club House. As we lived so near the clubhouse we were the janitors for several years.

Russell and his brother Archie had a combination wood saw and grain chopper, mounted on a wagon for summer and changed to sleigh for winter work. They sawed wood and chopped grain for farmers for miles around the neighborhood, during the years 1942 - 1951. In 1951 we sold the outfit and the farm and moved to Whitecourt, Alberta. We have three children: Rodney, Leona and Patricia (Mrs. Bob Walker). 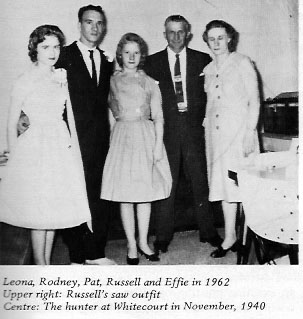 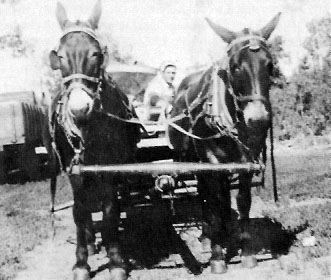 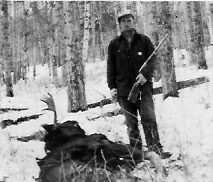 The hunter in Whitecourt 1940