I am the daughter of George Stanley; he was born at Frog Lake. My mother's name was Marie Merasty, I can't remember her father's name but she came from Meadow Lake, Saskatchewan. My baptismal certificate says I was born in 1909. Until I got the certificate I did not know my age but I knew I was over sixty years because my brother, Sam Batiste, whom they call J.B. Stanley, is about sixty- four. I have four brothers and four sisters; my brothers names are: Jimmy, Sam Batiste, Peter, Richard and my half brother, Arthur. Richard's wife was Elizabeth Kamewaisit, who died about ten years ago. My sisters are: Mrs. Philomina Aullotte, sometimes called Cheeskum; Annie Stanley, who married John Joe Fryingpan, and Isadore Mason's wife is my half sister. Isadore Mason died some time ago. James and Daniel Stanley are my father's brothers, and Philion Stanley is his half brother.

I went to the Frog Lake Indian Day School and Charley Quinney was my first teacher. After Charley Quinney died we had Alex Peterson, a whiteman, to teach us. We had to walk a long way to school, about five miles I think. Sometimes Charley Quinney would drive me and my brothers to school; sometimes it was too cold and my father wouldn't let us go. Some of the big girls made us lunch at noon. The food was supplied by the Indian Department, consisting of hard tack biscuits and bacon made into sandwiches, and they made us milk from powder.

My father used to hunt rabbits, deer and moose, and in the summer we would have duck and prairie chickens that he hunted. We used to have a lot of fish to eat from the nets that he set out in Frog Lake. We had no family allowances and no way to make money except by trapping and selling furs. The Anglican Bishop used to send us clothes and food. Sometimes my mother made us mitts and socks from yarn, and moccasins from moosehides. Later she used to buy us rubbers and other clothes from the Frog Lake store that was run by Mahmud Rahall. I never forget the socks, mitts and moccasins that my mother used to make for us to wear to school; she didn't have a sewing machine so she made everything by hand. She used the hair from horses tails to sew with. A red dye was made by boiling the roots of a plant that grew wild in sloughs. She dyed the hair from the tails of white horses and made flowers and other trimming on our moccasins with it.

My father made tables and chairs from lumber for our log house; we had no glass for the windows so we covered the openings with flour sacks. Our light was from candles my mother made. She put tallow from moose or beef in a saucer and put a rag in it to light so we could see. She had no cook stove so she made a kind of stove from stones she cemented together. She used to make bannock and cook meals on it. We traded fox and coyote fur for food and my father dried kinnikinick leaves to smoke in his pipe. 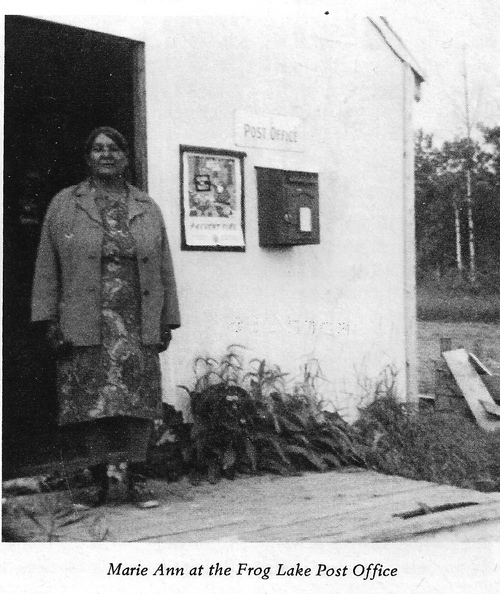 I married Thomas Faithful's son Sam; he passed away about twenty-one years ago. Most of my children were born at home but my last three were born at Elk Point Hospital. Sam Krider's wife was in the hospital and her baby was born then, when my last baby was born. This was not very long after my husband, Sam, died, so I named my baby Sam. My children are all living, except Phillip who

I became the wife of Alex Coustien over twenty years ago. At present we live in an old house I bought for $125. from Mo Hamdon. There were no windows in it so I bought some from Mo, which I put in myself as no one helped me. My husband, Alex Coustien, my son Henry, and my youngest son got posts and sold them to Mo to pay for the house and windows. I paid to put in the electric light myself. I had no cook stove until last summer when Mo Hamdon let me have enough money to buy one with; until then I cooked meals outside on a camp-fire. When it was too wet to cook outside I made a fire in my airtight heater and cooked on it. My son Henry gave me the heater. We have water close to the house but we have to haul our wood, or buy it, for our wood stoves. We used to be able to buy it for $10. a load but now we have to pay $20. George Kinch used to saw wood for us, but now my son Henry saws it for us with his power saw.

Before we got water close to the house I had no water to wash clothes with, so Katherine, Lawrence's wife, took my clothes to her home and washed them. Henry and Lawrence helped me out a lot, they found water near my house and had a well dug for me. We have no phone. Alex, my husband, gets the old age pension but I have not got it yet. I stayed with my daughter at Calgary for two years but now I am back at Frog Lake, the place I grew up in and where I like to live.