I was born in the state of Missouri to John Francis Lumley and Sarah Angeline (Walter). Dad was born at Canton, Knox County in Missouri, U.S.A. on April 18, 1865 and Mother was born March 5, 1886 at Barry Pike, Illinois. Her parents later moved to Labelle, Lewis County, Missouri, where they farmed. It was here my parents were married. My brothers, William Henry and George Lee; my sisters, Mary Catherine, Dora Frances and myself, Annie May, were all born at Labelle. My other sister, Veva, was born in Montana, where my parents worked on a ranch near Townsend. We later moved back to Missouri and farming until the spring of 1904 or 1905, when Dad left for Canada.

He came ahead of the family and worked in Edmonton, Alberta. In 1906 he filed on the N.E. -32-5414-4, then sent for the rest of us. We joined him in Edmonton, where we stayed for awhile, and in October 1906 we moved by covered wagon to the homestead. We brought with us the things necessary for survival until spring. First the house was built and then other buildings to keep a cow, chickens, and horses. Dad then returned to Edmonton, taking the older children with him so they could attend school. There was no school near enough to the homestead until the Ellsworth School opened in 1909. By then more people had moved into the district, including the McMullens - Jack, Bill and Olive with their mother Annie McMullen from Grandview, Manitoba. 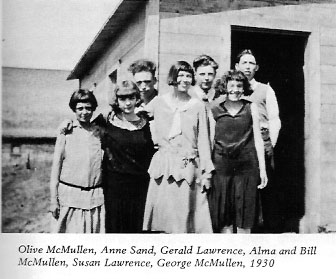 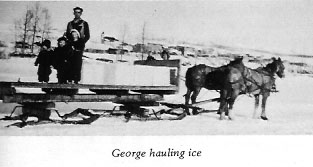 Jack was born November 29, 1887 and came to the Greenlawn district in 1908. He homesteaded N.W. 10-55-44. Later that year he returned to Grandview for harvest, and that winter worked there in a logging camp, coming back to the homestead in 1909 to break some land. The next year he drove a bundle team with Lem Minard's threshing outfit and the following harvest or two learned to run the steam engine on the same outfit. One season he was fined for not having a permit to run a steam engine, and Neal East ran it until Jack got the permit. One winter he ran a sawmill north of Lea Park.

When the McMullens first heard of Frog Lake, there was a Hudson Bay Trading Post there and two tribes of Indians, Cree and Chippewa, at Frog Lake and Onion Lake. The Heinsburg and Frog Lake districts have always been quite closely linked. Jack and I were married in 1914 at my parents' home in the Ellsworth district, north-east of Black- horse Lake. All our children were born there: George Francis, Alma May, Olive Ileene, Evelyn Beatrice and Dorothy, whose twin died at birth.

Jack threshed for quite a few farmers around the district. I believe it was in 1915 when he and his brother Bill got their own threshing outfit from Pete Eidsvik of North Park or Norway Valley. It was a steam-powered Minneapolis machine, and they traded horses for it. They used this outfit about three years; then Jack and three neighbors, Billie Dunfield, Archie Wood, and George Aitcheson bought a steam outfit from Stone and Gilchrist at Islay, which lasted about three years until the separator broke down in 1922, and they sold the engine. I think that was the last steam outfit in the district. The first time Jack had helped thresh was at Grandview as a very young lad. He was a bandcutter on his father's outfit. He crushed grain for the farmers to feed their livestock during the winter and cut wood for farmers for several years, as that was what we had to burn in those days; no luxuries like we have today. He was road foreman in Greenlawn, Heinsburg, and Riverton for five years. There wasn't much entertainment in those early days; dances in the winter, picnics in the summer time, and baseball for the men, which my husband took part in. This he enjoyed very much, playing with his friends. There were other sports at the picnics, too.

We moved from the farm into Heinsburg about 1930, where Jack ran a livery stable. He had the dray business in town for awhile, and for a time we had the post office and mail contract to and from the train each night. Jack bought grain for the Federal Grain Co. and we operated the telephone exchange for several years. Jack's health began to fail, and in time Dr. Miller advised him to try Victoria, B.C. to see if the change of climate would be better. This was in 1943 and it was quite a while before he recovered from his illness. He took employment with the B.C. Electric Bus Co. until his retirement. In 1971 my husband had a stroke, which left him paralyzed. He was hospitalized for sixteen months. He passed away March 27, 1973. I still make my home in Victoria.

All you folks who have troubles, remember the teakettle â it may be up to its neck in hot water but it always continues to sing.