I was born on the Frog Lake Reserve in 1912. I grew up here and went to the Anglican Day School where Charlie Quinney was teacher. My mother's name was Jane, that is Jane Cook before she married my father. I had one sister Ellen Kamewaisit who died about a year ago.

In 1918 we had a house on the south end of Frog Lake, that is on the Unipouheos Reserve No. 121. That is the time when we saw hard times. Most of the people were sick and could not do anything to help themselves. My father, George Fiddler, had to go to Onion Lake Agency once a week to get social assistance for us and our neighbors on the reserve. This Agency was about thirty miles from where we lived and the only way to travel in those days was by team and wagon. At Onion Lake they had the supplies all ready in bags. When he got back to Frog Lake he had to go around and put a bag at each door. 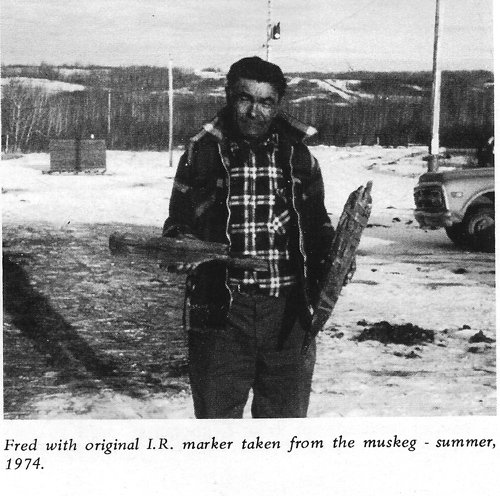 Before the sickness came we Indians were happy and healthy and it is terrible to think about what happened when all at once sickness came along and just left a few people. The road was right by our house and some days I would look out the window to see a team go by, taking the dead on the way to the graveyard, two or three at a time. By the time the sickness was over there were not many people left on the Frog Lake Reserve and the ones that were left were lonesome and sad.

My grandfather was named Henry Fiddler; he lived on the Puskiakiwenin Reserve, at the north end of the Frog Lake, all by himself. One day, after I was old enough to help and had a horse of my own, he came to our house and said to me, "Will you come with me and help me, I am going to stack some hay for my horse." He had one horse and took good care of it. I asked my mother if I could go and she said, "Yes, you can go." so I went with him to help him.

The next day we went to see if the hay was dry and I saw where he had cut the hay by hand. He had used a long knife to cut it with. The hay was dry so he got two forks he had made with berry sticks. He curled the prongs of the branch a little bit so the hay would stay and we put it up in haycocks. That is the forks we used to put the hay up. When it came to stacking he made a cutter and built a rack on top. It was just big enough for one horse to pull and I was the driver. We stacked for four days and he had lots of hay to do him for the winter for one horse.

First thing in the mornings we used to go to see the net he had put in the lake for fish, and he set traps for ducks and we had snares to catch rabbits, so we had fish, duck and rabbit meat to eat while we were haying.

About forty years ago I married a very pretty girl named Emma Sawepahu who was the daughter of Joe Sawepahu (Delver). We broke up quite a lot of land so we could raise grain. We began to raise cattle and horses and this was the way we made a living. Every fall we put up hay with a team for our livestock and I went hunting whenever I could. 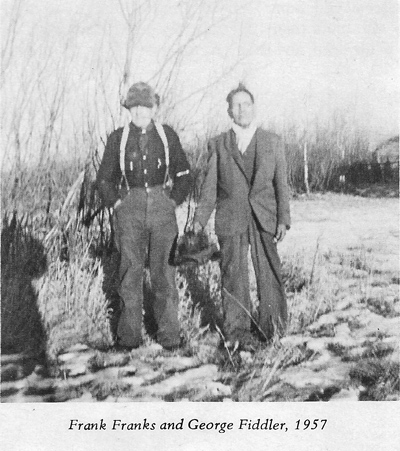 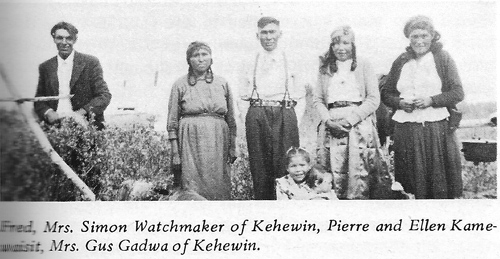 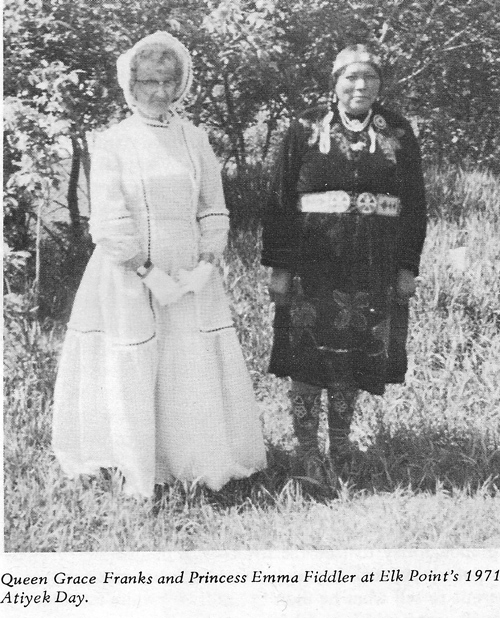 In 1952 I became a band councillor. This was when Nepahkuatow died and I took his place on the council. John Horse was chief then and the other councilor was George Stanley. The councillors were elected for a year and the elections were held in April; at the same time a chief was elected. I was councillor again in 1954 when Thomas Quinney was chief and again in 1962 and Alex Waskahat became chief. After that I worked two and a half years for the social welfare. I was elected chief in 1973.

When I was young, native people were not allowed to vote in the Federal elections, but later we were given our franchise so if we want to we can vote for the party whose leader might become Prime Minister of Canada. It was quite a few years after that when we were allowed to vote in the County elections. For a while this reserve had a representative to the St. Paul School Division when some of the children were going to Heinsburg School; but we are still under the Department of Indian Affairs at Ottawa.