As a small boy my first recollection of Alfred A. Biglow was when he came to our place to buy eggs and butter. He always had at least half a dozen dogs with him. How my mother hated the fleas that came with the dogs!

Mr. Biglow built a house about 10' x 20' complete with cellar in the side of a hill where he lived with all his dogs. I remember as years went by the front wall with the door in, leaned out more and more until it took quite a strong arm to push it open.

Alfred in his earlier years 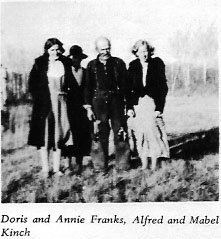 I will never forget on opening the door the overpowering smell of dogs and snuff. He always spit on the floor. His table was an eyecatcher: a pound of butter with a mouse trap on top, his plate, clean in the centre with an accumulation on the rim about an eighth of an inch thick.

His land and ours bordered on a small lake which was the home of many muskrats. As a boy this was my only means of getting a dollar. Mr. Biglow put boxes of carrots on the shore to coax the rats to where he could catch them. I would sneak through the woods with my twenty-two and try to shoot some of them. At the first shot the dogs started barking so he would come running to see who was stealing his rats. Needless to say, I would run for my life.

His farming operation was something to marvel at. He bought a team of gray mares at a sale and one of them had a stud colt so he worked up quite a business breeding mares for the farmers in the district. All his plowing was done with a walking plow. He had a six foot binder which he pulled with two horses. He always walked beside it and let the bundles drop one by one. He said it was too hard on the team if he rode. Finally one of the mares died so he had to break in Mark, the stallion, to work with the other mare. Then this mare died so he bought Dick, a nine hundred pound pony, to work with Mark. He overcame the difference in size by giving Mark one third of the evener and Dick two-thirds. His fields were almost a mile from our house and I can still hear him. "Get up Mark you son of a ****! 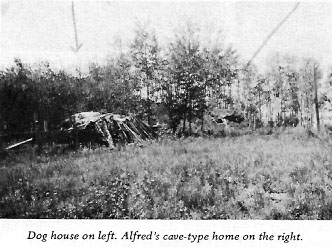 He cut a lot of hay on the shore of the lake so people came for miles in the spring to buy it.

Mr. Biglow passed away in the early fifties. I bought his land from the municipality, as it was called in those days. The house in the hill has caved-in but every time I pass by memories are brought back of a grand old man of my younger days.