Peter Pynten was born in Norway and left for Canada early in 1924, arriving in Winnipeg the first of April. From here he was (along with two other newcomers) sent by the immigration office to a farm in Saskatchewan. Naturally this was an English speaking family, which proved to be quite a problem for the Norwegians who knew little or no English. To make matters worse the lady of the house did not have much use for that many Norwegians, so the first thing she tried to make them understand was, with that many foreigners around, all she could smell was fish. This went on for some time before the boys could get the English language figured out, learning a few words here and a few words there. One of the three finally thought he had an answer for the lady, so he told her what he thought he could smell when she walked by. Well, whatever it was, it brought to the finish their first job in Canada.

They were on their own now, so Peter left for Alberta where he found a job herding sheep in Cadogan. This turned out to be a promising start in his new country as he was to get a share of the lamb crop. He soon filed on an abandoned homestead quarter which had a few buildings on it. With several more hired hands from other countries moving into the neighborhood it only stood to reason that, sooner or later, some excitement would be stirred up. This is one story we found from outside sources, and one that Peter doesn't like to be reminded of.

Some of the gang had got a story going that at this certain place they had a very different water called "Alkali Spirits." Naturally this finally roused the curiosity of Peter and Tony, a newcomer from Italy, so on a Saturday night they ventured out to sample this water. As it turned out, on Sunday morning it seems that the horse and buggy were at the barn door, but no Peter and Tony. I guess everyone had a good idea of what must have happened, so Dolly (the old horse) was put in the barn and the buggy was hid behind an old shed.

Just when the thought occurred to one of the boys that someone might have been hurt, in walked Peter, just in time to turn the sheep out to pasture. Of course everyone wanted to know what happened and naturally Peter didn't take too kindly to this, which he soon made clear in his broken English. When asked where the horse was his reply went something like this, "Vell yeesu kris! she take out and don't can find." When asked where Tony was he replied, "Tony, him can go to H- - -." That was all anyone could find out so one of the boys undertook to go look for Tony. Fortunately he was found sleeping it off in a haystack not too far away. Later that day Tony walked in to meet a fresh barrage of questions. What happened Tony? Where's Peter? Where's Dolly? "Oh Dolly, she donna like me sing, one hop Peter gone, one hop Tony finish gone".

Things were going quite well for Peter now so in the spring of 1926 he was able to send for his family from Norway. We arrived in Halifax and left by train for Cadogan where we arrived at midnight on March 4. From there we went by team and wagon to our homestead. 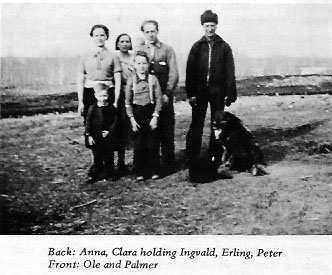 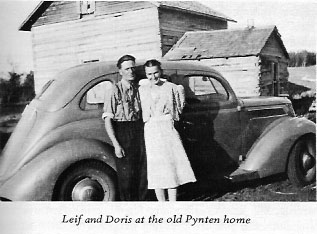 In 1929 it was decided to sell the sheep and go to more farming and cattle. This did not turn out to be too good as the depression and dry years were hitting about the same time. With things slowly going from bad to worse, we decided to head north in 1934. When we left, the dust was blowing quite lively, but by the time we got to Kitscoty there was quite a bit of snow. We crossed the river at Lea Park on the ice with horses and wagon.

We rented a bit of land in the Norway Valley district and with our few cows, and working out part time, we managed to get by for the next few years. In 1942 Dad went to work for the Department of Highways. In 1951 my folks moved to Whitford, Alberta, but Peter, not liking it out there, moved back to Norway Valley to live for some time. In 1965 Mother (Clara) moved on to Andrew, Alberta. 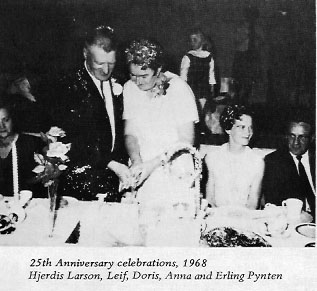 Today, at the age of eighty-three years young, Dad is in the Alberta Nursing Home. He has hardening of the arteries which makes his memory very poor. Mother is still at Andrew in fairly good health. The rest of the family are located throughout Canada. Two sons no longer with them, are Norman, who passed away at the age of three from spinal meningitis; and Olaf, who became known as Norman, was killed in a drilling rig accident near Valleyview, Alberta, in 1963. His family now resides in Regina. Palmer and family live in Hay River, N.W.T. Erling at Andrew; Ingvald (Redge) and family, Edmonton; Jim (Kenneth) and family, Orilla, Ontario; Anna, Heinsburg; Hjerids, Mrs. Willard Larson), Marwayne, Alberta; Esther (Mrs. Ed Walberg), Edmonton. I am the oldest of the clan and still reside in Norway Valley. I married Doris Franks, the lovely neighbor girl, in 1943 and we have two in our family. David and family who share the farm with us, and Lori (Mrs. Terry Best) of Heinsburg. We also have three lovely granddaughters. Where's that grandson?