as told by Donald, Eleanor, Ella and Hazel

Dad was born in Karriel, Iowa, U.S.A. on December 8, 1901. Two years later he moved with his family to the Vegreville district. We can remember him telling about going out to work when he was thirteen years old. He walked barefooted behind harrows for ten cents a day. In 1921 he married Hazel Emery, who was born in Iowa on March 18, 1899. They lived in the Warwick district, and it was there that the first five of their children were born.

When Mother's uncle, Bob Blais, lost his wife in childbirth in 1915 he was left with an infant daughter Hazel. She lived with Grandpa and Grandma Emery. When Grandma Emery died Mother was still at home with her father, so she took Hazel. She remained with her after she married Dad and was in our home until 1933. 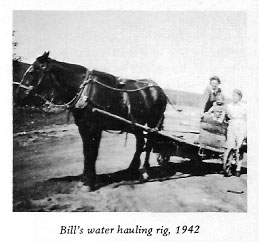 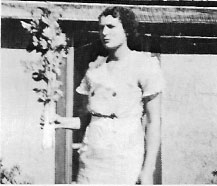 Helen Blais when she worked for Sam Boucher

Our grandfather, Bill Lorenson, was a land guide in the Vegreville area. Through him Dad got a homestead, the quarter cornering the one that he bought (the home place) in 1929. He spent some time getting the place prepared, then our family was ready to start north to our new home. First there was Dad, two men hired to help, and Donald. Tom Cluster drove a four-horse outfit on a high wagon, the box filled with furniture and tools. The other helper was a war veteran by the name of Carl Lawdl (spelling may be incorrect). He drove a four-horse outfit on a hayrack loaded with machinery. Other horses were tied behind. Dad and Donald rode horseback, chasing about twenty head of cattle. On the fifth day they arrived at the Heinsburg ferry. The river was so low that when they got halfway across they were chased off the ferry and had to swim or walk the rest of the way. They arrived that night at the farm three miles north of Heinsburg. The next day Mother and the girls came with Grandpa Emery in the Model T. 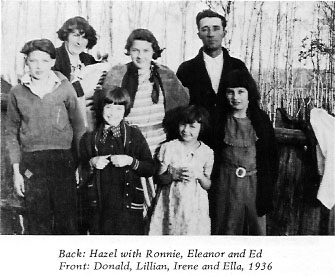 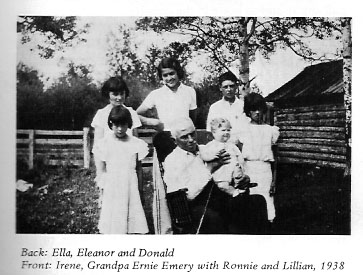 A few years later Ronnie, the last of our family, was born at Elk Point. We faced the usual gambles of farming, such as dry years, hail, and sleeping sickness among the horses. On July 19, 1939, while we were all away at the Marwayne sports, hail destroyed our crops. The following incident will illustrate just how important small change was in those days. We had a setting hen but no fertile eggs to put under her, nor money to buy any. Mother decided to put a new back on a rabbit robe. When she lifted the robe a quarter fell out. There was the answer to the egg problem!

A Finn by the name of Lauri made his home with us for a number of years. Two of his fellow countrymen, named Nick and Sam, were also in the district. Lauri built a number of log buildings for us, as well as toboggans, cutters, etc. He and the other two men worked on such projects as the first hall in Heinsburg, George Sanders' first house (1933), and buildings for Gunder Brocke.

As soon as we children were old enough we helped milk anywhere from a dozen to seventeen cows. Mother churned butter for sale, and Hazel delivered milk and cream in Heinsburg, travelling with a horse and cart or toboggan. Later a cream truck picked up the cans and delivered them to Elk Point.

We attended Lake Whitney School - walking, riding horseback, or driving a single horse on a toboggan for the three miles. Peg, our old horse, made many, many miles, and often carried more than one rider. Like other neighborhood children we took our turn doing janitor work at the school. One year, at noon, when the teacher fell asleep, we all left to play hooky at Middle Creek Crossing. Naturally on our way back we gave the school a wide berth. We heard not a word from the teacher next day. We later found out that she had slept until 2:00 p.m. We enjoyed corn roasts at Whitney, went to Frog Lake and Martin to play ball, and put on Christmas concerts as well as pie and box socials.

In October of 1944 Donald married Martha Aarbo, who taught at Whitney School. They went to live on the Berg quarter above the Saskatchewan River and west of Fraser's. They later lived across the road from Ella, who married Marvin Botting. They now live on Bob Chanler's "Coyotes Rest" farm near the Salt Plant. Four of the five children are married.

Rick and wife Rose Jean (Spilak) live in Edmonton; Marsha and husband Ross Purdy are in Calgary. Rick and Jean have a son. Gloria married Garth Picard. They live in St. Catherines, Ontario, where she teaches Grades III and IV. Garth is an instructor at Brock University. Darlene worked for several years as a dietary technician at various places in the province. She is presently employed at Safeway in the Lloydminster Mall. Sandra, husband Dennis Holthe, and small son live in Elk Point.

Eleanor married Floyd Bendixen. Their daughter Marilyn, Mrs. Gary Pinder, lives on a farm at Tomahawk. They have two daughters. She is a registered nurse, and Gary formerly was an A.I. technician. George, wife Gail (Rosychuk), and daughter Arlene live close to Floyd and Eleanor and are farming. Gail sometimes works at the Salt Plant. Marie, the youngest Bendixen, married Melvin Espetveidt and has a son and daughter. Melvin is Imperial Oil agent at Marwayne. Marilyn, George and Marie, as well as their parents, have been active in 4-H. George has done some judging also. Our sister Lillian passed away shortly before her fourteenth birthday in November of 1942. She had been ill for almost a year with Bright's disease. Irene worked at the Salt Plant for a time. In November 1951 she married George Kjenner. They have four boys - Randy, Kent and twins Brian and Blair, all of whom live at Fort Saskatchewan. George bought grain for twenty-one years, and now is in the insurance business.

Ronnie took over the home place and later worked at the Salt Plant, too. He married Sheila Wenzel in 1953 and now lives at the Salt Plant townsite. Their daughter Noreen married Leo Rainboth (Les and Pearl's son) and has one child, Tina. They live on the home place. Craig works at the Salt Plant, and Troy and Tracy are in school. Mother passed away in December 1957 after an illness of some six months. Dad remained on the farm for a year. He then sold to Ronnie and moved to Vegreville. He married Mary Van, a widow, who lost her life when a tractor upset. Dad remained there until his death in 1970. He, Mother, and Lillian are all buried in Frog Lake Cemetery.